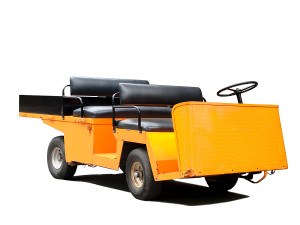 A runaway electric cart raced unmanned from an end zone to midfield at Cowboys Stadium and plowed into several people after a high school championship game Saturday night, bowling over the winning head coach and several others.

An emergency medical technician who declined identification told The Associated Press that one man who was conscious and talking was taken to a hospital with an apparent leg injury. The Arlington medical technician said he had no further information on the man’s condition but several others hit or grazed by the cart were checked out by emergency workers as they sprawled stunned on the field.

Separately, a Texas sports league official said a male staffer also was injured, not seriously, when the cart raced across field in a matter of seconds during onfield celebrations after the Texas 5A Division II football championship game. That official also declined identification.

The cart toppled Spring Dekaney coach Willie Amendola, who was being interviewed near the Cowboys midfield star, along with several others clustered about him moments after Dekaney had beaten Cibolo Steele 34-14. Hundreds of people were scattered about the field or were in the stands at the time.

Broadcast footage showed a stunned Amendola falling backwards into the cart’s passenger seat as it continued rolling. He appeared to try unsuccesfully to gain control of the cart, spinning the steering wheel with his left hand, before rolling out onto the artificial turf. As he tumbled out, a pursuing field worker hopped aboard and stopped the cart quickly.

“We have a disturbance down the field. Apparently one of the carts on the field got loose and I think there have been some folks injured in this. Oh my! That’s like a runaway cart there. And it finally took someone to stop it,” a shaken announcer is heard commenting on air as the cart rolled and then stopped. “That’s a scary thing.”

Others were seen on the ground afterward as emergency personnel rushed up, including one man sprawled motionless while someone cradled his head. Nearby, others helped a visibly stunned man to his feet.

It was unclear why or how the cart began moving under its own power. Stadium workers were picking up fluorescent orange sideline yard markers and pylons in one of the end zones after the game when the cart unexpectedly took off.

During its race across the field, the cart appeared to roll over the legs of some of those onfield. Afterward, televised broadcasts showed Amendola conducting another interview with a small streak of blood on his left forearm.

An Arlington police dispatcher as well as a spokeswoman for Texas Health Arlington Memorial Hospital, where at least one injured person was reported taken, told AP they had no information to release early Sunday.