Bill Hawks is a guy who works extremely hard for the things he has. So, the Blanchard resident was less than enamored one recent Sunday morning when he discovered thieves, too lazy to work for their toys, had relieved him of two ATVs, including one owned by his father. 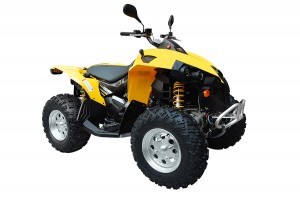 “I was pretty upset. I work hard doing air conditioning and refrigeration repair, and so does my father, so it’s frustrating when something like this happens,” Hawks said. “It makes you take a step back. Now what do we do? I’m just really disgusted.”

And Hawks isn’t alone. The Caddo Sheriff’s Office recently distributed a news release indicating that deer aren’t the only things being hunted. Homeowners are being warned that 4-wheelers and such coming out of storage in preparation for hunting season, are becoming easy targets for thieves.

“This is the time where people get them out and use them to prepare their hunting leases, and by doing so they end up displaying them for criminals to see,” said Lt. Bill Rehak of the Sheriff’s Detective Division. “Plain and simple, it’s that time of year, and anyone with an ATV should be aware of the potential for theft.”

Rehak recommends ATV owners mark their vehicles with their driver’s license number and park the vehicle out of sight. Obviously, the key should be removed from the vehicle.

Sheriff Steve Prator said the ATVs are typically taken across state lines, moved to private hunting camps, or sold locally at cheap prices. But Hawks said investigators recently recovered some stolen vehicles in Webster Parish, although his wasn’t among them.

Because of the timing of his incident, Hawks believes his house was under surveillance by the criminals. His wife is normally at home, but left on Saturday morning for a trip. Hawks was out all day in his work truck and didn’t pay attention to the ATVs when he returned home Saturday evening.

“They could have been taken during the day Saturday or while I was there Saturday night,” Hawks said. “I went to get one to pull a trailer about 10 o’clock Sunday morning and that’s when I noticed they were gone.”

Hawks and his father, Jack, were unable to get to their deer stand this fall so they have temporarily given up deer hunting. The theft also put a dent elsewhere.

“My daughter (12-year-old Hailey) likes to have friends and relatives over to ride the 4-wheelers. That’s why my dad leaves his here,” Hawks said. “Now she can’t do that.”

The Hawks live just off Hwy. 71 on Hwy. 169. Hawks said he doesn’t know if it’s related, but said thefts have increased up and down 71 since construction on I-49 began.

“There have been some bigger items, like backhoes, stolen also,” he said.

The Hawks’ ATVs were green 2002 Big Bear Yamahas valued at about $3,000 apiece. The sheriff’s office has the vehicle identification numbers on Hawks’ vehicles as well as on a 2009 Polaris 400 Ranger, valued at $13,000, taken from a construction site south of Hosston. It was parked in an open field near Hwy. 71 and Huckabay Road.

Hawks and his father are currently in limbo in regard to their All-Terrain Vehicles.

“They had been paid for for awhile, so we didn’t carry separate insurance on them,” Hawks said. “I didn’t keep them locked up either because my kids liked to ride them in the fields around our house. It’s just a shame that you have to lock and bolt down everything around your own home.”