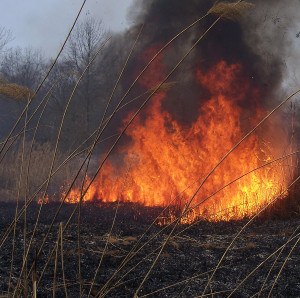 The flames of the massive wildfire that had swallowed nearly 1,400 homes in Central Texas had been tamed, but Webster Fire Chief Patrick Shipp and his crew — veterans of a fire season pushing his team to the limit — know the danger doesn’t end there.

Carrying a 40-pound safety pack and protective clothing covering nearly every inch of skin, Shipp and his team hunt down hot spot after hot spot in the Bastrop area, where one of the most destructive wildfires in the state’s history has burned for a week. Heavy ash paints a bleak, almost monochrome landscape. It’s hard to breathe. Every 10 minutes or so, Shipp squirts Visine in his eyes to ease the sting.

‘Every step you take is like a dust storm all around you, it’s pretty surreal,’ Shipp said.

It’s a familiar environment for Shipp and hundreds of other firefighters who have spent the past several months battling blazes across the state, and there’s little sign of relief. Shipp has been deployed two other times from his home 160 miles away from Bastrop, and he knows the fight won’t end anytime soon.

Texas is suffering its worst wildfire outbreak in state history. The Bastrop-area fire has been the largest of nearly 190 wildfires the Texas Forest Service says erupted this week, leaving nearly 1,700 homes statewide in charred ruins, killing four people and forcing thousands of people to evacuate.

The forecast for the months ahead offers little optimism. A La Nina weather pattern is setting up across the region that will likely sustain the dry, windy conditions that are so crucial to sparking and sustaining dangerous fires like the one near Bastrop.

Since Texas’ fire season began in December, local and state firefighters have responded to more than 20,900 wildfires that have consumed about 3.6 million acres — roughly the size of the state of Connecticut.

Shipp is among firefighters from around the state who are battling the blaze through the Texas Intrastate Fire Mutual Aid System — a Texas Forest Service program that uses local departments to help in major blazes and other emergencies. They’re working alongside teams of federal and local firefighters against the Bastrop fire, which officials say is about 40 percent contained.

Hundreds of firefighters from Texas and nationwide have been sleeping and resting at Camp Swift, a National Guard post near the blaze, with engines from cities around the state crowding a field as they returned from last Thursday’s shift. By Thursday night, firefighters said the largest flames had been tamed and they were now focusing on putting out hotspots and ensuring homes were safe for resident to return.

As they rested at the camp and prepared themselves for another long day ahead, firefighters acknowledged the weariness of chasing blaze after blaze.

‘It wears you down, but it’s what we do,’ said Jim Rodgers, chief of Northeast Fire and Rescue in Humble, Texas, who was working alongside Shipp.

Shipp said the intensity of the fire on the first day was unlike anything he had seen.

‘We would mark a place on the map and say, `We’re not going to let the fire get there,’ but when the fire would get there, it would jump over us,’ Shipp said. ‘We would have to retreat to the next road and finally made our last stand before we got beat again.’

Since the start of the year, Shipp and his crew — a collection of 11 firefighters from five fire departments — have battled wildfires in West Texas in the spring and in Midway earlier this summer. They already were eyeing fires in Montgomery County that they expected to be dispatched next.

‘This crew has missed Easter, Father’s Day, Memorial Day, the 9/11 anniversary and my kid’s first football game,’ Shipp said. When he returned Thursday night, Shipp had received a text message that his 12 year-old son’s team won the game earlier that evening.

The impact on the state’s firefighters is undeniable, officials say.

‘There’s no doubt that this fire season has taken its toll on fire departments in Texas,’ said Chris Barron, executive director of the State Firemen’s and Fire Marshal’s Association of Texas.

Barron, whose group has set up a fund to raise money to buy protective equipment and clothing for volunteer firefighters, said it’s too early to say what the physical and emotional impact on the state’s firefighters will be from this season.

And, Barron notes, ‘Fire season isn’t even close to being over yet.’

Those who may be feeling the most fatigue are volunteer departments, which make up 77 percent of the state’s firefighting force.

He said he got his first full night’s sleep on Tuesday night after working virtually non-stop over the weekend. Wednesday, the department told its firefighters to stand down because nearly all of their vehicles had been damaged by the wildfire.

Friday morning, Sutcliffe said his firefighters were back on the front line and worried about winds picking up.

‘These guys just don’t have a lot of people to pull from and they need some rest,’ said Russell Johnson, a battalion chief from the San Antonio Fire Department. ‘They’re overwhelmed.’