A nighttime test of pedestrian automatic emergency braking (AEB) systems to address the high percentage of pedestrian crashes that occur on dark roads has been introduced by the Insurance Institute for Highway Safety (IIHS). Four of the first 23 midsize cars, midsize SUVs, and small pickups tested earned the highest rating of superior, but more than half earn a basic score or no credit.

“As we expected, most of these pedestrian AEB systems don’t work very well in the dark,” said IIHS President David Harkey. “But it’s clear automakers can rise to this new challenge, as Ford, Nissan and Toyota each earn superior ratings for some models.”

In the daylight test, 19 of those 23 vehicles earn superior or advanced ratings.

“It’s discouraging that so many midsize SUVs and small pickups perform poorly in the nighttime test because research suggests these types of vehicles are more dangerous to pedestrians,” Harkey said.

A growing problem
IIHS introduced the daytime vehicle-to-pedestrian evaluation in 2019 and made an advanced or superior rating a requirement for a TOP SAFETY PICK or TOP SAFETY PICK+ award in 2020. Today, the feature is available on nearly nine out of 10 new models that IIHS evaluates, and half of the systems tested earn superior ratings in daylight conditions.

Pedestrian fatalities continue to tick upward. Since reaching a low point in 2009, federal estimates for 2021 show pedestrian crash deaths have soared nearly 80 percent. The approximately 7,300 pedestrians killed in 2021 accounted for almost a fifth of all traffic fatalities.

Three-quarters of those fatalities occur at night, when research shows most pedestrian AEB systems are less effective. A recent IIHS study found that the technology slashed pedestrian crashes by more than a quarter overall for equipped vehicles. However, there was no difference in crash risk for equipped and unequipped vehicles at night on unlit roads. Research tests conducted as part of the development of the nighttime evaluation also showed substantial declines in performance in dark conditions.

That pattern is clear in the first nighttime ratings.

“Eight of the 12 vehicles that earn a basic rating or no credit in the nighttime test got superior or advanced ratings in the daylight evaluation,” said David Aylor, vice president of active safety at IIHS, who designed the new program. 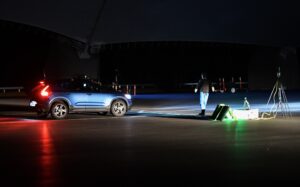 The nighttime test includes two common pedestrian crash scenarios, an adult crossing the road and an adult walking along the road at the edge of the travel lane. The ambient illumination surrounding the test track must remain below 1 lux — about the amount of light cast by a full moon — throughout the evaluation.

The evaluation doesn’t include a third scenario used in the daylight test that simulates a child darting into the road from behind two parked cars. The scenario isn’t part of the nighttime evaluation because few child pedestrian fatalities occur at night.

The crossing test is conducted at 12 mph and 25 mph, and the parallel test is conducted at 25 and 37 mph. Scores are awarded based on the average speed reductions in five repeated test runs on dry pavement. Separate trials are conducted with the headlights on the high beam and low beam settings, and scores are adjusted if the vehicle is equipped with high beam assist — a feature that automatically switches on the high beams when no other vehicles are nearby.

“The idea is to weight the score according to the beam setting that’s most likely to be switched on at the time of a potential crash,” said Aylor.

For systems that use cameras, the ratings apply only to vehicles equipped with the specific headlight systems used for the evaluation because the quality of the headlights may also affect performance.

An advanced or superior rating in the nighttime test will become a requirement for the TOP SAFETY PICK+ award in 2023.

How they fared
Only the superior-rated Pathfinder avoided a collision with the pedestrian dummy in both test scenarios at all test speeds with both its low and high beams.

The Camry, Highlander and Mustang Mach-E, which also earn superior ratings, avoided hitting the dummy in the crossing scenario at both test speeds and in the 25 mph parallel test with both low and high beams. All three vehicles slowed substantially with their high and low beams in the 37 mph parallel test, mitigating the impact.

None of the advanced-rated vehicles were able to avoid impacts in the 37 mph parallel scenario. With their high beams, most avoided hitting the pedestrian in the 12 mph and 25 mph crossing scenario and in the 25 mph parallel test. However, most struggled in those scenarios when using their low beams.

While some basic-rated vehicles avoided hitting the pedestrian dummy at the lower test speeds, none avoided collisions in the higher-speed crossing or higher-speed parallel scenario. The vehicles that received no credit for their pedestrian AEB systems did not slow at all or barely reduced their speed before hitting the dummy in multiple test scenarios with both their low and high beams.

All vehicles equipped with AEB as standard equipment except where noted.

*Vehicles with radar-only systems. Ratings for these vehicles were calculated based on their performance in the daylight evaluation.