The newest member of Farmers Insurance Group’s catastrophe response team is a four-legged robot that vaguely resembles a headless greyhound.

Farmers announced that it purchased a remote-controlled robot dubbed “Spot” from Boston Dynamics and expects delivery this fall, after the device is customized to meet the insurer’s specifications. Spot can access spaces that may be unsafe for human claims adjusters, such as collapsed structures or burned out buildings.

Samantha Santiago, head of claims strategy and automation, said Farmers is the first insurer to purchase the device. 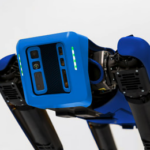 Santiago said Boston Dynamics is equipping its robot with a 360-degree camera, an infra-red camera, site documentation software and an extendable arm that can be used for tasks such as opening doors or turning nozzles. The device weighs 65 pounds. It is packed into “really large luggage” that can be carried in the back of a pickup to where it is needed, she said.

Santiago said Farmers uses drones for field inspections, but aerial photography is notsuitable in all situations. For example, Federal Aviation Administration regulations would not allow operators to fly drones when the air is so smoky that it restricts visibility.

Farmers said Spot will be used for both catastrophe response and more routine property inspections. Boston Dynamics will ship the device to its Los Angeles headquarters. Santiago said for now Farmers has purchased only one robot, but the company will assess its needs after gaining experience with the device.

Santiago said Boston Dynamics will assist in training two claims adjusters at the company’s innovation lab in the Woodland Hills neighborhood of Los Angeles. She said she expects to deploy Spot for field inspections before the end of the year.

Santiago refused to say how much Farmers paid for its customized robot, but a spokesperson for Boston Dynamics said the base model of Spot sells for $74,500. It can walk about five miles and can run for 90 minutes on a charge, the spokesperson said in an email.

Boston Dynamics says on its website that the resemblance of its robots to living animals is not a coincidence. The company said when its founders first began designing robots more than 30 years ago, they knew that advanced mobility in natural and built environment requires legs. Wheeled and tracked robots are limited by stairs, gaps, and obstructions such as cabling and staged materials —even minor height differences in flooring, the company says.

Versions of Spot are now used to monitor job site progress at construction sites, collect data at nuclear power plants and inspect industrial infrastructure, the company says. They can also be used by public safety agencies in hostage situations to assist in search and rescue efforts. Boston Dynamics specifically prohibits use of its devices for weapon systems.

Boston Dynamics was founded by Marc Raibert, a former electrical engineering and consumer science professor at the Massachusetts Institute of Technology and Carnegie Mellon University. Raibert founded the Leg Laboratory at Carnegie, located in Pittsburgh, Pennsylvania.

Google acquired the company in 2013, but sold the firm in 2017 to SoftBank, which last year sold a majority stake to the Hyundai Motor Group.