The last claim settlement I wrote was considered a bargain at $5 million, half of the $10 million amount that would be deemed a “nuclear verdict.”

According to VerdictSearch, nuclear verdicts have increased 300% since 2019. Adjusters can take action to improve commercial trucking injury outcomes. As my college Greek professor taught, “These things must be thoroughly mastered.”

The adjuster opens his or her new assignment. The claimant’s name is blank. The police report and agency — blank. The location — the name of a city and state. The few images in the claim file show catastrophic damage to the front of a 2014 Nissan, with the engine displaced into the driver’s compartment. A hand-drawn sketch showing a car’s travel across the center line. Nothing in the file describes the nature of the injuries.

At this point adjusters can err by creating delays. They leave a message for the client asking for the police report name and make a note to revisit the claim one week later. When word arrives from the client, the adjuster responds, “I don’t know what happened. Waiting on the police report.” Six weeks later, this claim is well on the path to a nuclear verdict as the adjuster takes the well-trodden path of “wait and see, ” and “nobody ever told me this was a serious accident.”

Rather than err on the side of delay and ordering another report, the adjuster can take proactive “need-to-know” steps on day one by asking, “What don’t I know and how can I obtain that information today?” By taking this approach, the adjuster identifies claim indicators of a serious loss: catastrophic vehicle damage, multiple fire and rescue personnel in scene photos, scattered debris field. The adjuster scans photos of the crash scene for a license plate, and runs the plate through commercial databases to identify the owner and obtain his or her claim history.

People like to talk. Should the adjuster find no match for an existing claim and no working phone, the local tow yard can provide some information. Google the tow yards in the area and call and ask them who towed from your loss location? Which hospital would they take injured parties? Do you have the vehicle? Who is the insurer? Most of the time the tow yards will talk with you. By knowing which tow yard has the vehicle, the adjuster know’s the location of the vehicle’s black box. Insurance adjusters and attorneys may wait a week to ten days to locate and move the vehicle. The “need to know” adjuster has been in action preserving evidence from the start.

Once the adjuster identifies the local trauma centers, they can call the hospital and ask for patient information. Give them the name and date of the injury. When a response such as, “She is in room 505,” is given, ask: “Is that intensive care or a regular room?” If the claimant is in trauma ICU, the adjuster now knows this is a serious claim. If the adjuster calls the hospital the next day, the adjuster may learn the patient was discharged at the end of the day.

Modern cars, truck, and some motorcycles possess event data recorders, or EDRs. The table below came from a claimant vehicle seven years old. Our client’s truck made a left turn before the accident. Using the above steps, the scene photos showed catastrophic damage, scattered across a long debris field. The tow yard was identified, and a claim filed with the adverse carrier who agreed to the black box download. The data download showed that the claimant’s car traveled 98 mph for five seconds before the airbags deployed. At two seconds before impact, he reduced speed to 91 mph. The same time we received the data download report, we received a letter of representation from the claimant’s attorney. 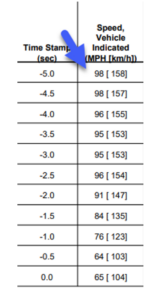 Our defense attorney forwarded the claimant’s attorney a copy of the report. The response was silence — interpreted as, “How can this be?” Plaintiffs’ attorneys are so used to outplaying adjusters that they don’t know how to respond once the canary is snatched from the mouth of the lion.

Due to need to avoid spoliation, it is necessary to retain defense counsel who will not only work to secure and preserve the black box data of the claimant vehicle but preserve the client’s data and make that vehicle available for inspection, once an attorney emerges. If no attorney manifests, defense can work with a reconstruction engineer to preserve and download what data is available from the client’s vehicle.

Plaintiff attorneys gravitate to commercial trucking claims because the profits are predictable along with the behavior of the adjusters. The typical adjuster is assigned too many claims. A serious claim with little information is quickly labeled, “Need police report — check back in six weeks.” Or, “Ordered police report — diary 30 days to see if report arrives.”

During the weeks of waiting for information, the plaintiff attorneys are securing or eliminating evidence. The salvage vehicle get sold at auction for scrap. Claimants are referred to neurosurgeons and coached on social media management. International buyers are snapping up salvage vehicles and shipping the cars overseas to fill the foreign used car market, taking evidence with them.

Claims ripe for arbitrage include those in which the client’s vehicle was not at fault, but a phantom “hit-and-run” car. A passenger in the innocent party’s car sues both the driver of his vehicle and the commercial vehicle. The driver’s carrier tenders their minimal limits, leaving the commercial carrier facing a nuclear settlement.

The arbitrage attorney speculated that the adjuster would fail to see the joint-and-several opportunity of the passenger and fail to launch an expert investigation because, after all, “His client was not at fault. We insist we pay nothing.” The most expensive claims are those the adjuster was expecting to pay nothing.

In another arbitrage, two or three local attorneys would represent — and then drop — a client. The adjuster thinks the case has no merit. The claim is closed with no further investigation. Shortly before the statute of limitations is reached, a lawsuit is filed arguing also spoliation of evidence.

Magic: Transform a Taurus into a Maserati

The audience watches nonplussed as the Las Vegas magician vows to transform an old Ford Taurus into a new Maserati. The magician walks around the Ford to show that nothing sits behind or beside the old jalopy. Then upon command, smoke and fire erupt on the stage with the sound of a race engine, the smoke rises to show a gleaming Maserati with two models smiling and waiving at the audience.

How did the magician disappear a 3,000 pound car and appear another? The answer: the Maserati was there from the beginning. Hidden in the shadow behind the Ford but just far enough for the magician to walk between.

In order to transform a Taurus claim into a Maserati claim, the adjuster will need permission to engage defense counsel who will: 1. Enlist an engineer to secure EDR data, 2. Engage reconstructionists, 3. Lock in attorney-client privilege and take driver statements, 4. Secure scene and police vest cam video, and 5. Secure truck dash cam video.

In the audience, the plaintiff attorney sees the jalopy adjuster — haggard and claim worn. The attorney can’t see the 454 horsepower Maserati GranTurismo purring quietly in the background ready to launch. It is satisfying for an adjuster to announce, “Presto! The jalopy will disappear. And, behold, the Maserati.” Depending on the claim, defense counsel may hold on disclosure of the Maserati until late in discovery in order to uncover plaintiff’s evidence in the process.

Thoughts such as, “All claimant information is on the police report” and, “It’s a serious accident, but we are not at fault” translate as: “The clock is ticking on a possible significant exposure.” Consider what resources are needed to obtain what you “need to know” now. Which service can identify a license plate or vehicle owner? Which service can obtain a report the fastest? One report could turn the investigation.