Film and television actor Sacha Baron Cohen, best known for his movie character Borat, is suing a Massachusetts cannabis firm for $9 million because Cohen says the firm used his likeness on a billboard without his permission.

Cohen and his company, Please You Can Touch, claim that the use of his image by Solar Therapeutics Inc. was without authorization and represents willful copyright infringement, false advertising and a violation of a Massachusetts statute against misappropriation of rights of publicity.

The suit alleges that Solar Therapeutics of Somerset, Mass. “deliberately featured the portrait, picture, image, likeness, and persona of Mr. Baron Cohen and his “Borat” movie character in a commercial billboard on a busy interstate highway in Massachusetts, to advertise the sale of the company’s’ cannabis products.” 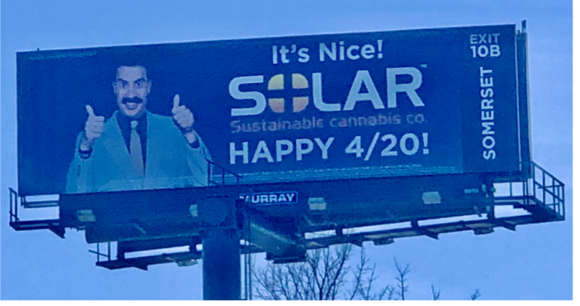 Solar Therapeutics is a cannabis dispensary that manufactures marijuana and marijuana-infused products. The suit is against both the company and Edward Dow III, president and director.

Cohen’s company, plaintiff PYCT, is the holder of the federally registered copyright for his Borat character.

According to the complaint, the billboard went up on April 9, 2021. On April 24, 2021, Cohen’s attorney sent Solar a cease-and- desist letter objecting and Solar removed the billboard three days later, on April 27, 2021. The complaint alleges that the cannabis firm has declined to compensate Cohen for the use of his image and his Borat character.

Cohen says the billboard falsely conveys that he endorsed Solar’s products when Cohen has never used cannabis in his life and “never would participate in an advertising campaign for cannabis, for any amount of money.”

Cohen is seeking market value compensation, statutory treble damages, and punitive and other damages, estimated to be in a total amount of at least $9 million.

A request for comment sent to Solar was not answered by press time.

Cohen claims cannabis remains a controversial product that has no interest in promoting and that he has never used cannabis because “he does not believe it is a healthy choice.” He is an Observant Jew who is proud of his cultural heritage and is aware that cannabis is a controversial subject within the Jewish community and many rabbinical leaders see cannabis use as a violation of Jewish law.

“He would be appalled if his young children were to discover, mistakenly or otherwise, that he was associated with the promotion of cannabis,” the suit says.

Cohen is an actor, comedian, writer and producer. He is a 2021 winner of two Golden Globe Awards for his “Borat: Subsequent Moviefilm,” and he has been nominated for three Academy Awards and three Emmy Awards.