Out with grimy microwaves and sticky coffee machines with worn-out buttons, in with stylus pens, QR codes, no-touch water coolers and mobile apps that pick what brew the machine will make for you.

From the headquarters of Ford in Dearborn, Michigan and Goldman Sachs in New York to Fedex facilities across the United States, workers are returning after months of lockdowns to the new reality of social distancing, hybrid remote and office work schedules, and strict hygiene protocols.

The break room, where employees used to get their daily fix of caffeine and office gossip, is a big part of that reboot as coffee companies, such as Keurig Dr. Pepper, Lavazza and Nestle roll out new technology for the COVID-19 era. 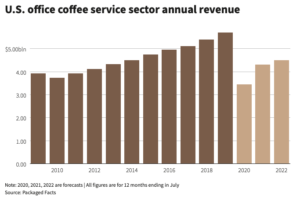 Nestle says it has worked with manufacturers to add a function to its coffeemakers that lets users to make a selection by just hovering a finger over the menu and has been delivering those to clients since June.

Lavazza lauched a new model in September that works with a mobile app to whip up those cappuccinos and lattes without having to touch the machine.

U.S. coffee machine manufacturer Bunn has chosen a different approach, retrofitting its machines with a QR code that lets users order drinks through a webpage.

Last year, supplying offices with beans and brewers was a $5.7 billion business in the United States alone, according to research firm Packaged Facts. Coffee companies, which saw lockdowns wipe out so-called professional sales that also include the hospitality industry, bet they can revive that business by addressing workers’ and employers’ concerns.

Dash For An App

Lavazza had a new brewer slated to debut at a trade show in May, but started redesigning it to add a touchless function when the pandemic struck in March, Bruce Williamson, vice president of innovation and marketing at Lavazza Professional said.

“We had to very quickly use the weeks (we had) preparing for an app.”

Williamson said a survey of about 170 consumers across the United States Lavazza commissioned in August validated its decision. It showed 40% of employees expected to leave the building less often to get a drink and to rely more on office supplies, but were nervous about infection risks.

“What they are telling us is… ‘I’m going to come back to the office but I’m nervous about touching the machine’.”

Employers, suppliers and designers are also experimenting with a one-stop service that allows office workers to refuel without going outside, while those working remotely can do it from the comfort of their home.

K-cup pod maker Keurig is supplying coffee for ‘mini-marts’ set up to replace office cafeterias and offering fresh fruit, vegetables, dairy, meat, coffee and other staples. It has also signed deals with several companies that have classified K-cup pods and brewers essential work items and pay for their deliveries to staff working remotely, said Phil Drapeau, the company’s general manager for the ‘Away from Home’ business.(Graphic: https://tmsnrt.rs/3cFKFzF)

Ford said more than 100,000 people out of its global workforce of 190,000 have returned to its facilities since May, but cafe service remains suspended and it offers pre-packaged meals and beverages instead. The carmaker is also testing onsite grocery kiosks selling locally sourced dairy, produce, and meal prep kits.

Goldman Sachs told Reuters that 15% of its New York workforce is back with standard precautions in place – mandatory masks in all areas except employee desks and limits on the number of people in conference rooms and common areas.

Surveys and official guidelines suggest offices will fill up only gradually and might even never return to pre-pandemic capacity.

GoodFirms, a Washington, D.C.-based research firm, said this month its international survey of 168 businesses showed nearly a third of workers had already returned and nearly 60% wanted to do so, but more than half remained concerned about their safety.

A makeover of office catering was important for addressing such concerns, says Alicia LeBeouf, marketing and retail strategy executive at food service company Canteen, which counts FedEx, Pinterest, Target and UPS among its clients.

At several FedEx facilities, Canteen has replaced card payment terminals at its grab-and-go stations with Canteen’s “Connect & Pay” app, which allows consumers to scan and pay with their mobile device, and access nutritional informational on products.

The layout also needs to change, says Tom Vecchione, workplace strategist at New York architecture firm Vocon. The company is knocking down doors and removing screens for its clients to create more spacious common areas that make social distancing easier while replacing chairs with stools to discourage people from lingering for too long.

Canteen’s LeBeouf said employers were banking on workers coming back, but they would not be returning to the same office they left before the pandemic.

“We’ve had to recalibrate and…rethink everything.”