Tropical Storm Beta is flooding Houston as it slows to a crawl along the Gulf Coast, forcing highways to shut and threatening to boost water levels even more before meandering toward Louisiana.

Beta will likely stall for most of Tuesday, wringing out rain across the region, the National Hurricane Center said. Forecasts are calling for as much as 6 to 12 inches (15 to 30 centimeters) of rain in the middle and upper Texas coast, with some areas getting as much as 20 inches.

While Beta’s flooding won’t come close to unleashing the devastation wrought by Hurricane Harvey in 2017, waterways throughout the fourth-largest U.S. city are swelling. Buffalo Bayou in Houston has risen by more than 15 feet since Monday, the National Weather Service said, while nearby Brays Bayou rose more than 21 feet. Highway cameras around the city are showing roads underwater, and several suburban school districts closed campuses. Houston asked all city employees not designated as essential workers to stay home

Isolated bands of heavy rain have formed across parts of Houston and to the southwest, said Ryan Truchelut, president of commercial forecaster WeatherTiger LLC in Tallahassee. Outside of those areas, rainfall totals have been close to 1 or 2 inches.

“It is a relatively small area” getting downpours, Truchelut said. For those areas under the worst of it, rain is falling at a rate of an inch per hour. 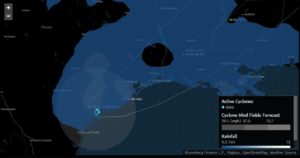 Beta is the Atlantic’s 23rd storm for this year, the second-most active season in records going back to 1851. So many storms have formed that the hurricane center has used up all the names on its official list and has begun designating new storms with Greek letters. Beta is the ninth storm to hit the U.S. this year, tying a record set in 1916, said Phil Klotzbach, lead author of the Colorado State University seasonal forecast

Across the Gulf, 8.4% of offshore oil production and 6% of natural gas remains shut in following Hurricane Sally, which struck Alabama last week, according to the Bureau of Safety and Environmental Enforcement. More than 3.6% of offshore platforms remain evacuated.

In addition to Beta, Hurricane Teddy is churning in the central Atlantic. Teddy is headed for Atlantic Canada and is expected to move over eastern Nova Scotia on Wednesday, according to an advisory at 8 a.m. New York time.

Teddy is also forecast to bring very large swells to parts of Bermuda, the Lesser and Greater Antilles, the Bahamas, the U.S. East Coast and Atlantic Canada.

–With assistance from Serene Cheong and Joe Carroll.

About the photo: A portable toilet is surrounded by flood water ahead of Hurricane Laura in Sabine, Texas, U.S., on Wednesday, Aug. 26, 2020. Photographer: Luke Sharrett/Bloomberg