Tropical Storm Sally unleashed “historic” flooding across Florida and Alabama, where it made landfall earlier Wednesday, and will likely cause as much as $8 billion in losses and damages even as its winds weaken.

Rain is falling by the foot across the region and river gauges are rapidly rising, threatening to break flooding records as Sally slowly drifts inland. The storm’s top winds slowed to 70 miles (113 kilometers) per hour as it moved west of Pensacola, Florida, the U.S. National Hurricane Center said in an advisory at 2 p.m. New York time.

“Historic and catastrophic flooding is unfolding,” Dan Brown, a National Hurricane Center forecaster, wrote in his outlook. “This rainfall will lead to widespread moderate to major river flooding.”

Natural disasters have hit the U.S. hard in 2020. Wildfires are raging across the West, killing dozens and destroying vast swaths of property and forests. Tropical storms and hurricanes have slammed into the East and Gulf Coasts, causing billions in damage, and a derecho ripped across the Midwest, leaving a path of destruction from Iowa to Indiana. The Atlantic has spun up 20 named tropical systems, the second most on record. The hurricane season doesn’t end until November 30. 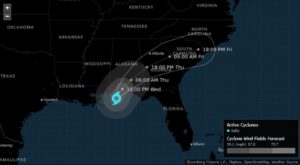 The combination of storm surge along the coast and the inland flooding could end up causing $8 billion in losses and damages across the South as Sally drifts north from Alabama through Friday, said Chuck Watson, a disaster modeler for Enki Research. Parts of Florida have already received upward of 20 inches (51 centimeters) of rain. In Escambia County, which includes Pensacola, more than 40 people were rescued from flooding, the Associated Press reported.

Sally’s rising winds helped it push a 5.6-foot storm surge into Pensacola, which is the third-highest recorded there, said Jeff Masters, a meteorologist with Yale Climate Connections. More than 500,000 homes and businesses were without power in Alabama and the Florida Panhandle at 1:45 p.m. local time, according to utility websites.

“You are trading the wind aspect of the damage for the inland rain threat,” Truchelut said.

The Shoal River east of Pensacola has risen nearly 12 feet in the last day, according to the National Weather Service. The nearby Styx and Fish Rivers rose nearly 20 feet.

Sally made landfall near Gulf Shores, Alabama, at 5:45 a.m. New York time Wednesday, according to the National Hurricane Center. It churned onto shore as a Category 2 hurricane on the five-step Saffir-Simpson scale, up from a Category 1 on Tuesday. Sally is the eighth storm to hit the U.S. this year.

The storm’s strengthening before landfall is “really more academic interest than anything,” Watson said. “We have the ability to see smaller areas of high winds than we used to.”

That heavy rain will spread throughout the South, some of it soaking areas that are still trying to recover from past floods, including the deluge brought by Hurricane Florence in 2018. There are isolated areas that could get close to 3 feet of rain, the hurricane center said.

Across the Gulf, staff had returned to some offshore production platforms, with 18.5% still evacuated, down from just over 23% Tuesday, according to the Bureau of Safety and Environmental Enforcement. Almost a third of rigs remain evacuated. Just over 27% of oil production and nearly 30% of gas has been shut in.

There could be some damage to cotton crops because there will be so much rain, but many growing areas are at higher elevations and that could protect them from severe damage, Truchelut said.

In addition to Sally, a few other storms are churning in the Atlantic. Hurricane Paulette is drifting out to sea after battering Bermuda. The other storms — Teddy and Vicky — won’t be an immediate threat to land. There is a 70% chance a fifth storm could form in the next five days.

About the photo: Flood waters move on the street, Wednesday, Sept. 16, 2020, in downtown Pensacola, Fla. Hurricane Sally made landfall Wednesday near Gulf Shores, Alabama, as a Category 2 storm, pushing a surge of ocean water onto the coast and dumping torrential rain that forecasters said would cause dangerous flooding from the Florida Panhandle to Mississippi and well inland in the days ahead.(AP Photo/Gerald Herbert)
Copyright 2022 Bloomberg.