The Justice Department, Homeland Security, and other agencies outside of the military have paid private contractors at least $28.6 million for “less lethal” weapons and armor since May 25, when the death of an unarmed Black man in Minneapolis police custody sparked racial justice protests nationwide. The spending through Aug. 19 marked a 114% increase over the same period last year, according to contract data analyzed by Bloomberg Government.

The purchase of gear — including some lasers and “tactical robots” — coincided with the dispatch of federal agents to protests throughout the U.S. that, while largely peaceful, at times included property damage and violence. The latest unrest unfolded in Wisconsin after police shot an unarmed Black man in Kenosha and the National Guard was mobilized Monday.

The actions of some agents in Portland, Oregon, which included reports of intelligence monitoring of journalists and protesters and intercepts of electronic communications, is the subject of an investigation by the Democratic-controlled House Intelligence Committee and has raised questions about federal authority. A lawsuit filed Tuesday on behalf of protesters there claims the U.S. government “unleashed unprecedented, sustained violence and intimidation” and seeks compensation for use of force and detentions. 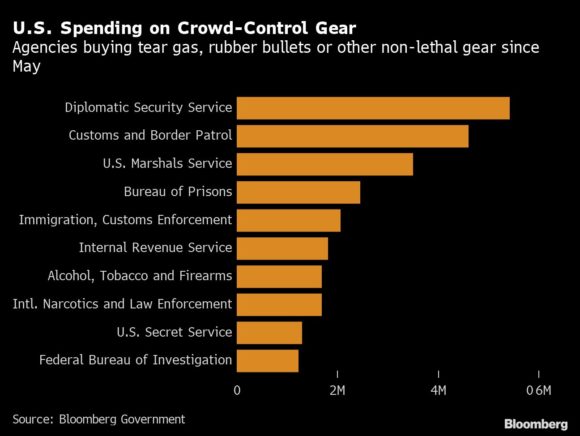 “For there to be that large of an escalation in budget for crowd-control devices and less lethal devices shows that there is an effort afoot to create a force of federal law enforcement that is geared toward public suppression,” said Wayne McElrath, former director of forensic investigations for the Government Accountability Office from 2011 to 2019. “The vast majority of federal organizations are not designed or trained for crowd control.”

McElrath, now a senior investigative adviser with the Project on Government Oversight, which lobbies for government transparency and reduced military spending, said divisions between federal and local police forces are being unnecessarily blurred over property damage issues that should be addressed at the local and state level.

The May 25 death of George Floyd in Minneapolis and a video of a police officer kneeling on his neck touched off widespread demonstrations, and Trump on June 1 threatened to deploy the U.S. military to end “riots and lawlessness.” Pentagon officials distanced themselves from his warning the following day, saying that it would be better to rely on the National Guard for law enforcement where needed.

Trump issued an executive order on June 26 directing heads of the Defense, Justice and Homeland Security departments to send agents into cities upon request for six months “to assist with the protection of federal monuments, memorials, statues, or property.” The White House could extend the order’s time frame before it expires at the end of December, regardless of the outcome of the November presidential election in which he is running against former Vice President Joe Biden.

Between Floyd’s death and Aug. 19, the federal government made more than 275 purchases of “less lethal” and crowd-control equipment such as chemical irritants, tasers and ballistic armor, according to an analysis using Bloomberg Government’s Contracts Intelligence Tool. The spending was more than double that of the same time frame in 2019.

The Department of Defense was excluded from the analysis as were purchases of deadly weapons, such as firearms, live ammunition and tactical knives. The CIT database may not capture every federal transaction with a private contractor, and this analysis may not encompass all purchases relevant to its criteria. 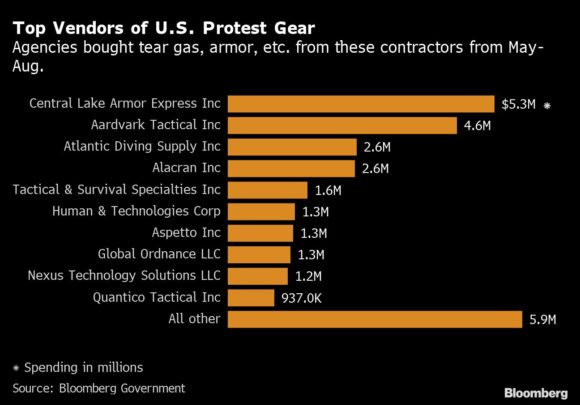 The Justice Department deployed special teams from the Bureau of Prisons and U.S. Marshals Service to Washington and elsewhere starting June 1 “to protect federal property and personnel.” In less than three months, the department bought at least $9.3 million worth of weapons and armor for law enforcement situations in which the stated goal isn’t to kill — more than three times the $3 million it spent on such contracts in the year ago period.

Justice Department spending included millions of dollars on ballistic armor and gas masks with wireless communications, and nearly $1.5 million on “less lethal munitions” such as tear gas grenades and rubber bullets. They also included more than $234,000 on weaponized flashlights.

The Marshals Service in July bought more than $67,000 worth of “WeaponLights” sold by SureFire LLC, priced online at $300 per light. It gives officers an LED beam nearly equal to three commercial light bulbs that can “positively identify threats at significant distances while temporarily impairing your adversary’s vision,” according to SureFire’s website.

The Justice Department needs items such as tactical flashlights, tasers and ballistics armor as part of Operation Legend, an initiative begun on July 8 that has sent more than 1,000 federal agents into cities and funded local police for the purpose of “targeting some of the most violent criminals on the streets,” said Kristina Mastropasqua, a department spokeswoman. She didn’t respond when asked if the supplies were used against protesters.

Some federal agencies that purchased large amounts of less lethal crowd-control gear during this period were not involved in responding to domestic protests. The Department of State’s Bureau of Diplomatic Security, which spent more than $5.4 million on such equipment, secures diplomatic travel and documents and has taken on a bigger role securing diplomatic facilities overseas from terrorist attacks, according to its website.

The Department of Homeland Security spent more than $9.3 million on less lethal enforcement gear — an 8% increase from the same time period in 2019. That included nearly $3 million on Tasers made by Axon Enterprise Inc., a Scottsdale, Arizona-based company that has increased its market value by as much as $6 billion since the recent period of domestic unrest began.

Axon said it established a line of business for federal law enforcement customers after its body camera and digital evidence management products proved successful with buyers like the U.S. Marshals and the Bureau of Alcohol, Tobacco, Firearms and Explosives.

Homeland Security on Aug. 6 purchased $16,520 worth of B.E. Meyers & Co.’s Glare Helios product. Matt Meyers, chief executive officer of the family-owned laser maker in Redmond, Washington, said in a phone interview that the Helios laser is only approved for law enforcement use in the U.S. and produces a “veiling glare that is a visual obscurant to the person of interest that’s also eye-safe.” The Glare product line was launched in 2003 for U.S. and allied forces in Iraq and Afghanistan.

“It’s like somebody turned on a green sun,” he said of the Helios.

On June 11, DHS bought $83,204 worth of Robotex Inc.’s “tactical robots,” a device used by “SWAT and tactical response teams” to allow them to safely inspect dangerous situations without sending in personnel, according to the company’s website. This type of device has only been purchased by the agency once before in a $14,700 transaction in 2016.

The Justice Department and the military are the only other government arms that have contracted for tactical robots in years past.

Agencies under DHS may purchase crowd control and less lethal equipment for a variety of reasons due to the range of responsibilities they hold, Homeland Security spokesman Harry Fones said. Many can’t be discussed publicly because they’re part of ongoing missions, added Fones, who didn’t provide a response to questions submitted by email on the purchase of specific items and on a broader increase in expenses.

–With assistance from Paul Murphy.