The threat of a rare double storm blow looms for the U.S. Gulf Coast despite a weaker Tropical Storm Marco, with more than half of offshore oil production already shut and forecasts showing the potential for Laura to become a major hurricane before landfall Thursday.

Marco lost power as it approached Louisiana Monday, but is forecast to skirt the coastline before dying out later this week in Texas, said Don Keeney, a meteorologist with commercial forecaster Maxar. The worst of Marco will likely be confined to just along the shoreline and a little inland, while Laura could arrive Thursday as the Atlantic’s first major hurricane of 2020. The last time two storms plied the Gulf together was 1959.

The double threat has already prompted evacuations of offshore energy platforms, and almost 58% of oil output and 45% of natural gas production in the Gulf of Mexico has been shut, according to the Interior Department’s Bureau of Safety and Environmental Enforcement.

Gulf Coast refineries and petrochemical plants are often located in low-lying areas vulnerable to flooding. In 2017, an Arkema SA chemical plant about 25 miles (40 kilometers) east of Houston had a fire and explosion after it was flooded by Hurricane Harvey. In September, Exxon shut its Beaumont refinery in Texas because of flooding from Tropical Storm Imelda. 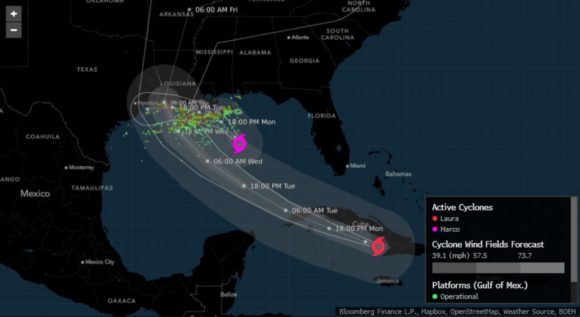 Laura almost certainly won’t be as damaging as Harvey, however. Harvey hit Texas as a Category 4 storm and then got pinned in place by larger weather patterns, causing it to send record rains across the eastern half of the state for days. Laura may pack a severe punch at landfall, but it will quickly exit the area, reducing the potential for lingering effects. The last hurricane to hit Texas was Hanna, just under a month ago.

Energy platforms in the Gulf of Mexico that account for as much as 17% of America’s oil production and about 3% of gas output are designed to withstand storms of this magnitude; they regularly shut and restart as systems pass through. But two hurricanes roiling the region in quick succession threaten to keep operations shut in for longer and cut into energy supplies more than usual.

Marco’s energy impact will be mainly confined to offshore installations, but Laura could cause problems for refineries and fuel-distribution hubs from Houston to Louisiana, said Jim Rouiller, lead meteorologist with the Energy Weather Group. Offshore platforms were retrofitted after 2005’s Hurricane Katrina to endure stronger storms, but onshore flooding could threaten the 45% of American fuel-making capacity that’s located along the Gulf Coast, as well as more than half the nation’s gas processing.

“The big issue is if it hits any of the refineries — present track is right over Lake Charles and 10% capacity at risk,” said Chuck Watson, a disaster modeler with Enki Research. “A wobble puts the north Texas coast in play.”

Western sugarcane in Louisiana between Lake Charles and Lafayette will be the most at risk from Laura, said Drew Lerner, president of World Weather Inc. in Overland Park, Kansas. Things would be worse if the storm veers more to the east.

For cotton crops, some parts of western Mississippi Delta area, central and interior parts of Arkansas also could be impacted, he said.

Energy Transfer LP shut in its Stingray Pipeline, which hauls gas from offshore fields to Louisiana, in anticipation of the storms. Ports in Louisiana are limiting operations or evacuating, and ship movements have been restricted in some areas. The Louisiana Offshore Oil Port, a major crude import hub, has suspended marine terminal operations.

Marco’s initial strike could make matters worse if Laura ends up in the same area. It could take several days for Marco’s coastal storm surge to subside, and if Laura strikes nearby it could push a wall of water into areas still inundated by Marco, said Jeff Masters, a meteorologist with Yale Climate Connections.

Even in its weakened state, Marco could push ocean levels up along Louisiana by as much as 4 feet above normal, the hurricane center said.

Due to a climate-change driven sea level rise, ocean levels in the Gulf are about 6 inches (15 centimeters) higher than they were when Katrina came ashore 15 years ago, FM Global, a commercial insurer, said in a notice to clients. The Gulf also is warmer than normal this year, which will fuel both storms as they near land.

Laura has already killed at least seven people in Haiti and the Dominican Republic, the Associated Press reported.

Thirteen storms have now formed across the Atlantic this year, including five that hit the U.S. It is the fastest start to a hurricane season in records going back to 1851, said Phil Klotzbach, a storm researcher at Colorado State University.

About the photo: Workers board up windows in the French Quarter in anticipation of Hurricane Marco and Tropical storm Laura on August 23, 2020 in New Orleans, Louisiana.