A supplier of tear gas to the police and the military is experiencing a surge in demand for a launcher it makes for home use as consumers anxious about civil unrest arm themselves for self defense.

Byrna Technologies Inc.’s Byrna HD resembles a pistol and comes in seven colors — including hot pink and desert tan. It can fire a solid ball about the size of a quarter or ones filled with a blend of tear gas and pepper spray.

The chemical balls burst on impact and, the company says, can “incapacitate” a target “for up to 30 minutes by causing temporary blindness and respiratory distress.”

Sales have been fueled by anxieties over the coronavirus pandemic and the waves of protests across the country that followed the May 25 death in police custody of George Floyd, an unarmed African-American Minneapolis man. 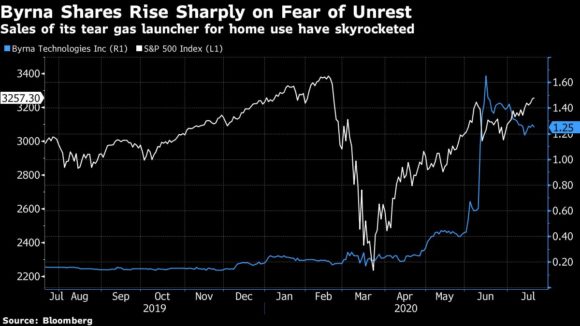 That incident touched off mostly peaceful demonstrations, though some were accompanied by violence and looting.

Fox News host Sean Hannity last month told viewers of his program that he owned several Byrna HD weapons and “It could hopefully be an alternative in a very volatile, dangerous situation.”

“They even come equipped with lasers so you really can’t miss for accuracy,” Hannity said.

Online orders worth nearly $2.5 million flowed in over the next 24 hours — a one-day haul that exceeded the total orders for all of the launcher’s first 14 months on the market. It also exceeded the net revenue of $1.34 million the company reported for the preceding six months, ending May 31.

A headline in an orange band running along the top of the website’s homepage says: “Due to unprecedented demand, shipping for Byrna HD Launchers is 8+ weeks.”

Byrna, based in Andover, Massachusetts, attributes the sudden popularity of the weapon, which it calls “an effective non-lethal option for home safety and personal security,” to the coronavirus outbreak and street protests.

“The general level of apprehension among the population as a whole has led many people to seek means of protecting themselves and their families in the event that there is a breakdown or a fraying of the fabric of civil society,” the company said in a filing with the U.S. Securities and Exchange Commission.

Sales of conventional firearms have also risen this year. Background checks compiled by the Federal Bureau of Investigation, a proxy for gun purchases, jumped to a record in June.

Shares of Byrna are up more than 500% this year on the over the counter market. Byrna has nearly tripled in value since Floyd’s death alone.

The launcher retails for about $325. Extra 68-caliber chemical ammunition goes for $300 for a box of 95. Target posters, laser sights and tactical shoulder holsters are extra.

The company, which had 14 employees at the end of last year, says that buyers don’t need to undergo background checks or procure permits. It calls the launchers “the safest and most effective non-lethal self-defense weapon on the market today” and says customers can “save lives without the risk of taking one.”

But experts say that doesn’t mean that devices like these won’t hurt people.

Diane Calello, executive and medical director of the New Jersey Poison Center, said tear gas and pepper spray from any source causes spasms and pain in the eyes and can target the respiratory system.

“The problem is that while the stated goal is incapacitation without injury, that’s not always the case,” she said.

She hasn’t studied the Byrna HD but has treated people exposed to tear gas. If the quantity of chemical irritants is high enough, it can cause long-term or permanent injuries, including burns to the cornea and respiratory injuries, specifically for those with vulnerable conditions like asthma, she said.

Byrna’s website acknowledges the risk, saying “chemical irritants can cause severe injury, permanent disabilities, and in rare cases, death.” It recommends that medical assistance should be sought immediately in the case of accidental discharge or exposure.

“While the Byrna HD is a non-lethal device, it is still a dangerous weapon and if used improperly can result in criminal and/or civil liability,” the company says in its Terms of Use. The weapon should never be pointed or fired at someone’s head, neck or back, the company adds.

In a statement to Bloomberg News, Byrna said that its training manual provides instruction on the device’s proper use and “makes clear that the only responsible use of the Byrna is for self-defense purposes.”

Sales have soared this year. The company sold nearly $1.1 million worth of Byrna HD devices in the three months ending May 31, according to its most recent filing with regulators. That is 36 times the value of devices it sold in the same period a year earlier. Those numbers don’t include the sales sparked by Hannity in June, suggesting Byrna’s next financial report will show even stronger sales.

Bryan Ganz, Byrna’s chief executive, who declined to comment for this article, said in a June 9 press release that “the biggest challenge we are currently facing is keeping up with rapidly growing demand.”

It’s a dramatic change in fortune for the company. Byrna hasn’t posted a quarterly profit in more than a decade of operation. The boost in sales and an anticipated infusion of capital, the company said, represents “substantial progress towards alleviating doubt as to the company’s ability to continue as a going concern and that substantial doubt may be removed by the end of the current fiscal year.”

The company says it plans to open in September a U.S. manufacturing facility in Fort Wayne, Indiana, to augment one in Pretoria, South Africa, and will apply for a listing on Nasdaq Inc.

“We are focused on meeting current demand for the Byrna HD by increasing production capacity but we also have a lot of exciting plans for the future,” Byrna said in its statement.

Byrna says the device isn’t a firearm under U.S. law because it uses compressed air to fire its rounds like a paintball gun instead of gunpowder. A spokesperson for the U.S. Bureau of Alcohol, Tobacco, Firearms and Explosives declined to comment but referred to an online guide that defines a firearm as a weapon that relies on an explosive charge.

Some U.S. states and cities have set their own restrictions, mostly on the ammunition. Nevada, for example, prohibits the tear gas and pepper ammo so only the pepper-only version is shipped there. California won’t allow either so the company only sells its plastic impact rounds to consumers there — except in San Francisco where they don’t ship at all.

New York City, Portland, Oregon and Washington D.C., won’t allow the device to be sold at all.