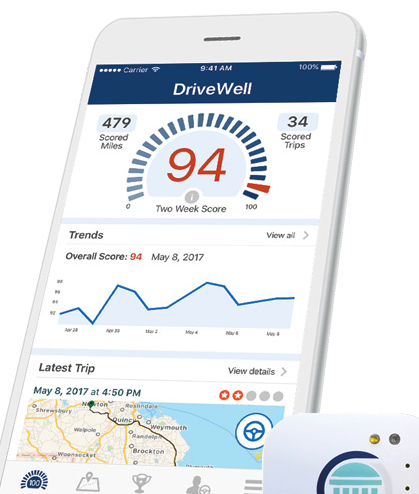 Cambridge Mobile Telematics, which produces the sensors and software used by insurance carriers to reward safe drivers with discounts on policies, is now offering its product to the general public for free.

CMT said its Safest Driver platform can reduce phone distraction and other risky driving behaviors by 50 percent in just 30 days. The app maintains a two-week driving score by monitoring speed, acceleration, braking, cornering and phone use.

In conjunction with the release of the product to the public, Uber Technologies and Progressive Insurance are sponsoring a contest using the Safest Driver platform. From Jan. 15 through April 26, the contest is handing out weekly prizes of $50 to $250 for drivers in Austin, Texas and Charlotte and Raleigh-Durham, N.C. that earn the best driving scores while using the app.

Prior prize-based contests hosted in Boston, Seattle, San Antonio and Los Angeles showed drivers who participated reduced their risky driving behaviors like phone distraction, speeding, and hard braking by up to 57%, CMT said.

The Safest Driver app is free to download on the Apple App Store and Google Play Store.

Insurity said in a press release that Kingstone, headquartered in Kingston, N.Y., has been usingdisparate claims systems from different technology providers to support the business it writes in New York, New Jersey, Rhode Island, Massachusetts and Connecticut. By adopting ClaimsXPress across the organization, KICO will have a unified platform that improves operations, the company said.

ClaimsXPress is a cloud-based system that bypasses the installation and maintenance of on-premise hardware and software, improving an insurer’s ability to scale operations quickly and to support growth into new regions, Insurity said.

Insurity, based in Hartford, Conn., is a software provider to insurance carriers, brokers and managing general agents.

New Jersey insurance coverage attorney Verne Pedro, who started with the firm on March 2, is managing the office, the law firm said in a press release.

“Our hope was to expand to New Jersey in 2020, but we had to find the ideal attorney – an accomplished lawyer with leadership skills to manage the office and one with a practice and work ethic that complements what we’ve built,” stated Katrine Beck, co-founder of Fullerton Beck. “Verne checks all the boxes.”

Pedro earned a Bachelor’s in Arts from Rutgers University in 1995 and a Juris Doctor from Seton Hall in 2001. He also earned a certificate in cyber security from Harvard Vice Provost for Advances in Learning. He is admitted to practice law in state and federal courts in New York, New Jersey and Pennsylvania.