Car thieves don’t like to be cramped. If they don’t steal a large vehicle, they at least want to ride in style.

“The models most likely to be stolen tend to be powerful, pricey or pickups, but vehicle theft is also a crime of opportunity,” says HLDI Senior Vice President Matt Moore. “Better security features on all vehicles would be the best way to address the problem.”

On the other end of the spectrum, the BMW 3 series hardly got stolen at all. The institute said there was only one whole-vehicle theft claim for a BMW 3 out of 104,901 insured vehicle. years, which means one vehicle insured for one year.

The Tesla Model S and Model X also had low theft rates. The institute said that may because, as electric vehicles, the are usually parked in garages or close to a house to be near a power supply. A separate HDLI report last year showed that electrical vehicles from a variety of manufacturers had lower theft rates than comparable vehicles.

One vehicle that previously ranked among the most-stolen, the Cadillac Escalade, dropped from the top 20 list this year. The institute said the Escalade had competition from the Infiniti QX80 and Land Rover Range Rover, which are now among the most stolen.

The institute said the Escalade, like most modern vehicles, has ignition immobilizers to deter thefts, but that wasn’t enough to keep it off the top 20 list in previous years. Since then, Cadillac has added antitheft features such as glass-breakage sensors, motion detectors and an inclination sensor that triggers an alarm if someone tries to take the wheels off, tow the vehicle or lift it onto a flatbed truck.

“The models most likely to be stolen tend to be powerful, pricey or pickups, but vehicle theft is also a crime of opportunity,” said Moore. “Better security features on all vehicles would be the best way to address the problem.”

The institute said that is annual report, which is based on the number of claims per insured vehicle year, is more useful to the consumer than other reports that list the raw number of thefts. Those reports tend to be dominated by the most common vehicles on the road. 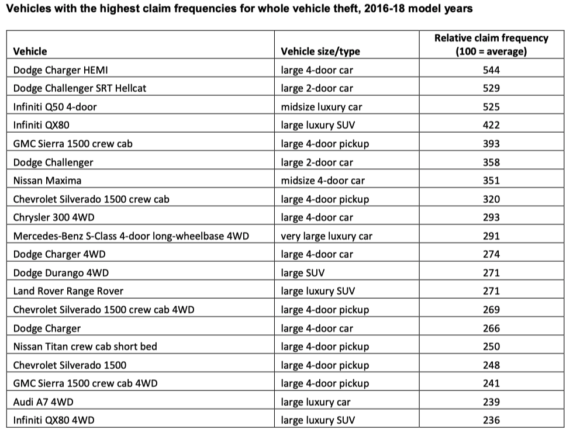 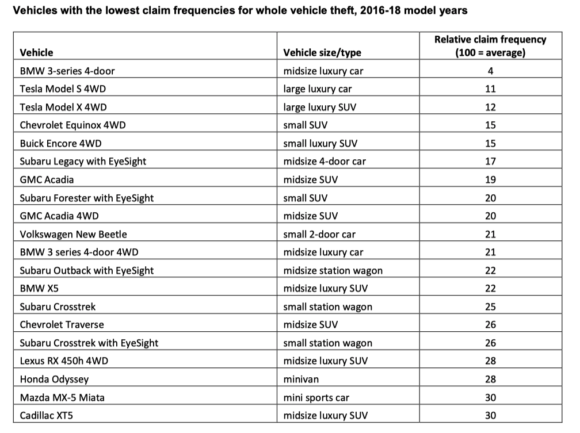