Separate reports by financial analysts concluded that property and casualty carriers improved the condition of their claim reserves in 2018, in large part because of favorable loss development in the workers’ compensation line.

Keefe, Bruyette & Woods reported that property casualty carriers had a net $13.9 billion in “reserve redundancies” across all lines at the end of 2018. That included a $14 billion redundancy in workers’ compensation, offset by deficiencies in other liability, commercial auto and products liability.

A.M. Best painted a less rosy picture. It reported that property and casualty reserves were strengthened by $3.6 billion during the year, but were still deficient by $29.3 billion, or 3.8% of reported surplus, at the end of 2018. The ratings house said the reserve deficiency has remained at less than 5% of surplus since 2015. 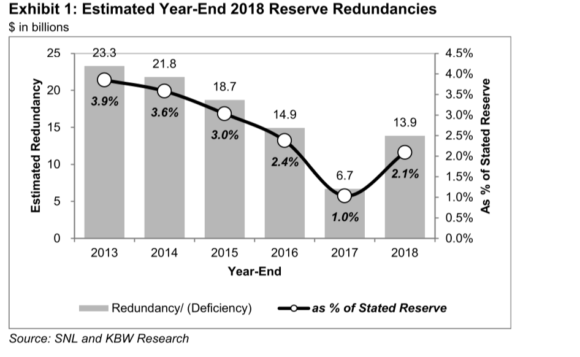 “In 2017, the industry reported its 12th consecutive calendar year of favorable reserve development,” A.M. Best said in a press release. The full report is available for purchase.

As reserve redundancies increased, carriers stepped up releases from their reserves. KBW said property and casualty reserve releases amounted to $12.1 billion in 2018, with $7.1 billion of that coming from the workers’ compensation line.

The strength of reserves was not equal among all carriers. KBW said American International Group and Mercury General Corp. both held less in reserves than investors would expect. He said AIG is modestly over-reserved, while Mercury is underreserred.