Every uptick in wind speed along the Gulf of Mexico shoreline is of enormous interest to Mike Eilts.

Eilts, senior vice president for weather at DTN, a Minnesota-based analytics firm, knows that an unexpected cold front in Louisiana, nudged southward by a jet stream unsettled by global warming, can push rising winds into the Gulf, putting dozens of floating oil rigs at risk.

The rigs can withstand hurricane-force winds of 80 miles per hour if they have time to turn to face the tempest. But if they’re hit from the side, their pipes can be severed with just a bit more than a 35-mile per hour breeze. DTN is paid to make sure that doesn’t happen.

“If they get blow-off, it’s a huge problem that can cost them about $15 million each per event,” Eilts said in a telephone interview. “We run special models to watch those fronts, and we call out the captains of each ship within three hours of a cold front coming.”

From IBM and AccuWeather Inc. to outfits like Riskpulse, Jupiter and DTN, companies that track weather have created an intensely competitive new industry in just the last five years. Their client lists have grown to include insurers, banks and commodity traders, engineers and architects, shippers, retailers and the travel industry. And little is done without their input.

Will the Polar Vortex leave a beer or mayonnaise-filled freight car stranded in Chicago? Losing just one car load to frozen switches on the line can cost a shipper $30,000, according to Stephen Bennett, founder and chief operating office for Riskpulse, a San Francisco-based weather analytics firm. The average shipment involves 50 cars per train, Bennett said, and high volume shippers can use five trains a week.

The bottom line: Just a one-week delay affecting a major shipper can cost companies involved as much as $7.5 million 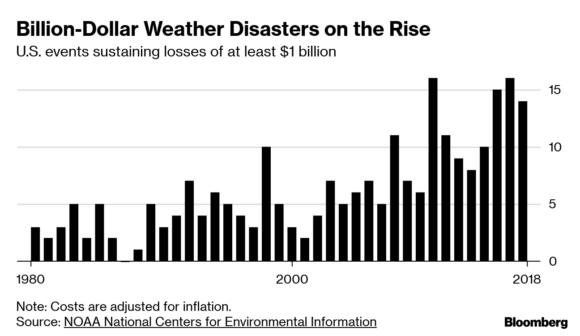 Bennett knows exactly where every rail car and truck carrying a client’s goods is located, he said in an interview. Their locations are constantly monitored for weather risks using proprietary computer models built by Bennett and others. The computer then spits out the best way to get around hurricane force winds, soaking rain, blinding snow or extreme cold, like the -23 degree Fahrenheit (-30.5 Celsius) deep freeze that hit Chicago in January.

Mary Glackin, vice president for weather business solutions and head of public-Private Partnerships at International Business Machines Corp., says companies can no longer depend on any individual’s past experience to predict when and where extreme weather will hit, and its consequences.

Instead, she said, forecast teams at IBM use complex algorithms and supercomputers to give businesses “a most-likely scenario, and a number two too.”

IBM bought the Weather Company’s product and technology assets in January 2016, and now works with cities and big utilities to help them deploy resources before a big weather event hits. For instance, Glackin said, they help utilities determine when and where they should shut off power lines, or when cities or utilities need to send out an early call for added workers to get power lines repaired and help quicken the cleanup.

Early on, IBM surveyed 1,000 c-suite executives on what they needed from their weather services. They don’t care “what the forecast is,” said Glackin, who is also president-elect of the American Meteorological Association. All they really wanted was very specific insight “on what to do to decrease their risk.”

The teams that do this are often extraordinarily broad-based. Along with meteorologists, they can include hydrologists who study the flow of water, atmospheric scientists, civil engineers and architects, computer experts and, in some specific cases, former farmers and railway workers.

No one company “will be the silver bullet for all the different industries and types of climate risks,” said Grieves, the membership manager at The Collider in Asheville.

About one-third of the U.S.’s $18 trillion gross national product is generated by industries vulnerable to changes in the weather. There were 14 weather events that caused at least $1 billion in damages in the U.S. last year, according to the National Centers for Environmental Information. That’s more than the 6.2 per year average from 1980 to 2018.

And the U.S. is just one part of the picture. Globally, 39 weather events caused at least $1 billion in damage, according to Munich Re, a German reinsurance firm. The average worldwide since 2000: 28 a year. Extreme weather hit 62 million people last year alone and forced 2 million to relocate, according to the United Nations weather agency.

“What you can be sure about is that these things will occur more frequently, and be more intense,” said Anders Levermann, professor of dynamics at the Potsdam Institute for Climate Impact Research in Germany, in a telephone interview. “In the longer term, the global economy will be shaped around the weather.”

Rich Sorkin, chief executive officer for the analytics firm Jupiter Intelligence saw the writing on the wall 10 years ago. That’s when he founded a company he named Zeus to do 30-day forecasts for the power sector and commodity traders, using the then-nascent trend in enterprise computing.

“For a variety of reasons we were a bit too early,” Sorkin said. But the effort served as a “warm-up” for what’s now Jupiter, born in 2017. Since then, Sorkin has assembled a roster of climate science all-stars including Josh Hacker from the National Center for Atmospheric Research, Elizabeth Weatherhead, a specialist in arctic climate, and Alan Blumberg, a researcher in how coastal cities and their oceans get along.

The goal: Provide clients with local weather projections on time scales ranging from hours to decades.

In March, Jupiter announced it completed a $23 million Series B funding round to expand, and that it was partnering with Australian insurer QBE Insurance Group Ltd. and the Bermuda-based insurance-linked securities firm Nephila Capital Ltd.

“With each passing year, it becomes clearer that the insurance industry must factor climate change into its underwriting and pricing practices,” David McMillan, group chief operations officer at QBE, said in a statement. “Climate change affects everything we do as a company.”

There was a time when forecasters were largely hired by the media and the government, and most weren’t highly paid. Now, many are paid at similar levels to top engineers graduating from the best technical schools in the nation, and their skills are wide based.

Pennsylvania State University, for instance, offers a risk management option on how weather — from extreme events to the tiniest of changes — can move financial markets, as well as four classes that aim to improve student programming and data-analysis skills.

“We’ve found that students who follow that track are often coveted by employers,” said Jon Nese, a professor in the meteorology and atmospheric science department.

When IBM’s Glackin speaks at colleges, she says she likes to ask meteorology students “what it is you want to combine this degree with? Is it business? Is it some kind of social science? Economics? Because you will be much more valuable if you can bring multiple kind of perspectives together,” she said.