The self-driving Ford Fusion, with a white crown of cameras, radars and lasers sensing its surroundings, was coursing through the congested streets of Miami when a bicyclist cut across its path. The robot didn’t even tap the brakes. It cruised along at 25 miles an hour, knowing that the bike was far enough away and moving fast enough across three lanes of traffic that there was no risk of collision. 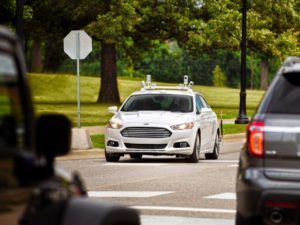 Grandma is no longer behind the wheel in Ford Motor Co.’s robot rides. A major knock against autonomous cars has been that they are officious, rule-following bores that actually cause crashes due to their cautiousness. Ford’s self-driving partner, Argo AI, has been working to relax the robot behind the wheel and give it the confidence of human drivers, but without sacrificing safety. It’s a fine line.

“We want our vehicle to fit in and drive with the flow of traffic,” Bryan Salesky, Argo’s co-founder and chief executive officer, said in an interview. “There are some robotic vehicles that would wait forever when they were trying to take an unprotected left turn. They would never go.”

Ford isn’t quite ready to go full bore with its self-driving vehicles – they aren’t slated to hit the streets until 2021. But the automaker felt comfortable enough with them to host journalists and analysts in Miami this week to demonstrate that its autonomous efforts aren’t lagging by as much as they’ve been perceived to be by investors and analysts.

Dismissing Demos
While Alphabet Inc.’s Waymo expects to launch a robo-taxi service in Phoenix next month, and General Motors Co.’s Cruise Automation plans to debut its own automated ride-hailing business in a U.S. city next year, Ford dismisses those efforts as little more than demonstration projects. The company claims it’ll deploy tens of thousands of self-drivers on the streets of multiple major cities in a profitable business moving people and packages.

“If we wanted to build a product today that ran like a bus system without any deviation, we could be in the market right now,” Jim Hackett, Ford’s chief executive officer, told reporters before they set off to ride in a small fleet of self-driving Fusions that navigated around jaywalkers, wrong-way driving mopeds and cars riding in reverse down a busy street.

“I do not feel behind,” Sherif Marakby, president of Ford’s autonomous vehicles unit, said in an interview. “When we go into service with AVs, we are going to know what we are doing and where the profitability is.”

Profit Potential
Ford sees the profit potential being immense, at perhaps double the margins of an auto business that’s happy to clear 10 percent. Marakby pegged the eventual value of the market for robot ride-hailing and driverless delivery at $332 billion annually.

“The opportunity of that market is massive,” he said. “It’s a margin that is like no automotive markets today.”

Self-driving cars are expected to upend the transportation industry and become a business worth $7 trillion by mid-century, according to a report last year by Intel Corp. and Strategy Analytics. Hackett said the market may actually be $10 trillion for self-driving cars and a variety of mobility services that are emerging.

“That’s half the size of the U.S. GDP,” Hackett said. “That’s why all the tech companies are so interested in this segment.”

VW Talks
But getting into the driverless game doesn’t come cheap. This is why Ford is talking to Volkswagen AG about investing in Argo and the automaker’s autonomous-vehicle unit, according to people familiar with the discussions. Ford is looking to match the $5 billion in investment GM’s self-driving unit has drawn from Japan’s SoftBank and Honda Motor Co.

“The investment needed in autonomous cars is billions of dollars,” Marakby said. “We don’t believe one entity is going to be able to launch a successful fleet and services of self-driving cars around the whole world. It’s just too big for one company to do.”

Ford has been in Miami since February testing its version of the autonomous future, which involves having cars work around the clock to ferry commuters as well as deliver dry cleaning, flowers and food. Ford is testing driverless delivery concepts with Domino’s Pizza Inc., Postmates Inc. and this week took a step toward handling autonomous grocery deliveries for Walmart Inc. The automaker is drawing from its strengths in pickup trucks and commercial vans to try to stake a claim to robot delivery, which Marakby said could be a $130 billion business by 2026.

Ride-Hailing
The ride-hailing opportunity is even larger – $202 billion a year, according to Marakby – which is why Ford is focusing on smoothing out the ride and stiffening the spine of the robots that once timidly traversed traffic.

During a test ride in Miami, the Argo self-driving software barely flinched when a bird nearly flew into its rooftop cameras. A light tap of the brakes and slight swerve was all the errant gull elicited, in a situation that in the past might have caused the car to slam on the brakes.

A few moments later, a white Audi was driving in reverse down the middle of a road that the Ford self-driver was turning right onto. The autonomous vehicle paused a moment, as if gawking at the crazy human driver, and then carried on with its turn while the Audi finally careened left down a side street.

Hoofing It
To be sure, there were other moments that required human intervention from the safety driver sitting behind the wheel. A moped stuck behind a large truck in a left-turn lane swerved into oncoming traffic to get around the big rig, just as the Ford autonomous vehicle was turning into its path. Argo’s human safety driver quickly grabbed the wheel and darted around the wrong-way traveling moped.

Then there was the police stallion standing in the drop-off zone for the Ford robot ride as it was supposed to pull to a stop at the curb outside a row of hip stores and restaurants. It was as if transportation had come full circle, from the 19th century to the 21st.

“Is that a horse?” the puzzled human safety driver said as the car approached the curb. “I’ve got to take over.”