Southwest Airlines Co. said it has sent some aircraft-engine fan blades to the manufacturer for inspection, though the carrier’s own review found no faults like the one that caused a blade to crack in flight, leading to a passenger’s death last month. 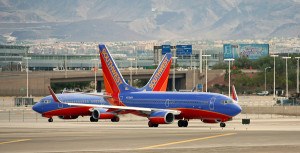 The carrier completed inspection on 35,500 blades, Chief Executive Officer Gary Kelly said at the airline’s annual meeting Wednesday in Annapolis, Maryland. “The findings have been zero, which is obviously good news.”

However, “several dozen” blades were sent to General Electric Co. for additional examination, he told reporters after the meeting.

The destruction of the flight’s CFM56-7B engine has global implications since the model, built by a joint venture of GE and France’s Safran SA, is one of the world’s most popular. Before such power plants get approval from aviation regulators, manufacturers must demonstrate that failed blades won’t trigger extensive damage if they break loose.

A blade sheared off on Flight 1380 to Dallas from New York on April 17, destroying an engine and sending metal flying. One piece broke a window and a woman was sucked partly out before being pulled back in. Her death was the first ever passenger fatality for the airline from an accident.

Kelly said he didn’t expect that GE’s examination will turn up problems. “GE’s inspection protocol will identify a crack before it gets to the failure stage,” he said. While the airline uses ultrasonic tests to detect cracks, GE can conduct electromagnetic reviews.

Some of the blades sent to GE had coating anomalies, according to Chief Operating Officer Mike Van de Ven, and were forwarded “out of an abundance of caution.”

Separately, U.S. regulators on Wednesday ordered inspections within 90 days of blades that have made at least 20,000 flights – earlier than the initial deadline. Failure to comply could result in unsafe conditions, the Federal Aviation Administration said. The accelerated schedule was based on findings from the investigation of Flight 1380.

Southwest has already gone beyond the inspections required by regulators, examining blades on all of its CFM56-7B engines, which power 703 of the Dallas-based carrier’s 717 aircraft. The airline said last month that a cracked blade was discovered and replaced during reviews last year.

Southwest canceled 550 flights to complete its stepped-up inspections after committing to getting them done within 30 days of the accident. The carrier has said that a drop in bookings after the accident could cost as much as $100 million.

Kelly said several recent safety incidents, including a cracked window and a cabin that began to depressurize in flight, hadn’t created the perception that the airline is unsafe.

“But we need to work hard to earn our customers’ trust every single day,” he said. “Obviously this has been a somber time for us.”

The failure on Flight 1380 began with a crack that gradually expanded under the stress of multiple flights, allowing the blade to break loose. It bounced forward and collided with the engine inlet, tearing it apart and sending shrapnel into the fuselage and a wing of the Boeing Co. 737.

The blade had been inspected seven times since late 2012 but without the sophisticated technology that airlines are now under orders to use, the National Transportation Safety Board has said in a preliminary report.