The private U.S. property/casualty insurance industry saw its net income after taxes drop to $7.7 billion in first-quarter 2017 from $13.4 billion in first-quarter 2016-a 42.2 percent decline-and its overall profitability as measured by its annualized rate of return on average policyholders’ surplus fall to 4.4 percent from 7.9 percent, according to ISO, a Verisk Analytics business, and the Property Casualty Insurers Association of America (PCI). 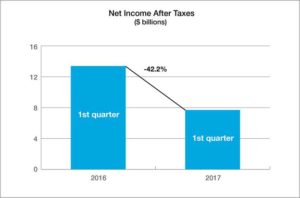 According to Beth Fitzgerald, senior vice president, Industry Engagement for ISO, there were three major wind and thunderstorm events that totaled more than $1 billion in damages during the first quarter of 2017.

“That’s the first time we’ve seen three events of that magnitude in the first quarter in more than 60 years. Fortunately, insurers are well capitalized, and short-term volatility in catastrophe losses is not affecting their ability to provide coverage and pay claims. They’re also seeing some acceleration in premiums and investment income. However, to remain profitable and provide appropriate returns on their capital, insurers need to plan for the long term and continue to engage in disciplined underwriting based on robust data and analytics,” Fitzgerald said.

While industry operating results continued to deteriorate in the first quarter of the year, insurers also saw some improvement from a year earlier.