New midsize SUV ratings from the Insurance Institute for Highway Safety show that headlights are improving when it comes to visibility, but many still need to do a better job of lighting the road ahead while limiting bothersome glare.

This is the fourth group of vehicles IIHS has evaluated since launching headlight ratings in 2016. 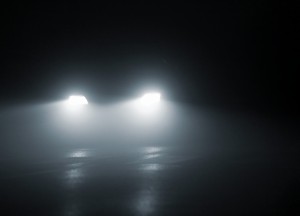 “As a group, midsize SUV headlights perform slightly better than the other SUVs and pickups we evaluated last year, and that’s encouraging,” says IIHS Senior Research Engineer Matt Brumbelow. “Still, we continue to see headlights that compromise safety because they only provide a short view down the road at night.”

Since few consumers test drive a vehicle at night before buying, IIHS headlight ratings help shed light on this basic, yet essential crash avoidance technology. Nighttime visibility is critical to highway safety because about half of traffic deaths occur either in the dark or at dawn or dusk. Differences in bulb type, headlight technology and even something as basic as how the lights are aimed all affect the amount of useful light supplied. Properly aimed low beams light up the road ahead without temporarily blinding drivers of oncoming vehicles.

In the Institute’s evaluations, engineers measure how far light is projected from a vehicle’s low beams and high beams as the vehicle travels straight and on curves. Glare for oncoming vehicles also is measured from low beams in each scenario to make sure it isn’t excessive.

Headlights can vary by trim line, so vehicles often come with multiple headlight variants. The 37 SUVs that IIHS evaluated have 79 possible headlight combinations.

Most headlights use one of three different light sources: halogen, high-intensity discharge (HID) or LED. Each of these can be paired with either reflectors or projector lenses. Projector headlights use one lens to spread the light out, while reflectors have multiple surfaces that bounce the light forward. All the good- and acceptable-rated headlight variants in this group of midsize SUVs have projector lenses, and the three good-rated headlight variants are HID. That said, having HIDs and/or projector lenses doesn’t guarantee good or acceptable performance in IIHS evaluations.

The XC60 is available with optional curve-adaptive HID projector headlights, which earn the top rating. Curve-adaptive headlights swivel with the steering wheel to better illuminate bends in the road. The XC60’s HID headlights also can be purchased with optional high-beam assist, which helps increase high-beam use by automatically switching between high beams and low beams depending on the presence of other vehicles. Models equipped with high-beam assist earn extra credit in IIHS ratings. Consumers who want the good-rated HID headlights on the XC60 need to buy the Advanced package or the Active Dual Xenon Headlights package.

The Ford Edge is another poor performer. The Edge’s base halogen projector and optional HID projector low beams provide inadequate visibility in all test scenarios, including the straightaway, on sharp curves and on gradual curves. The high beams on both versions have inadequate visibility, too. Both types of the Edge’s low beams also produce unacceptable glare. The halogen low beams, for example, put more light in the eyes of oncoming drivers on a straightaway than on the left side of the road.

When headlights produce a lot of glare, it doesn’t necessarily mean they do a good job lighting up the road for that vehicle’s driver. When equipped with halogen projector headlights, the Edge and the Buick Envision would rate poor based on either glare or visibility alone.

More than half of the 79 headlight variants evaluated have too much glare. In 17 of those cases, the headlights would be rated poor based on glare alone. Complaints about glare from oncoming headlights are common, research by the National Highway Traffic Safety Administration indicates.

“Managing glare can be more challenging for taller vehicles like SUVs and pickups because their headlights are mounted higher than on cars,” Brumbelow says. “Better aim at the factory can minimize glare.”

The Hyundai Santa Fe Sport’s optional curve-adaptive HID projector low beams have the most downgrades for glare among the midsize SUVs evaluated. The other two available headlight packages also create excessive glare, and all three are rated poor.

In contrast, glare isn’t a problem for either of the headlight packages on the Hyundai Santa Fe, which is a distinct model from the Santa Fe Sport and has different headlight designs. The curve-adaptive HID projector headlights with high-beam assist, part of the Tech Package, earn a good rating. The Santa Fe’s base halogen headlights earn a poor rating because of inadequate visibility.

Best available headlight system for each model
2017 models unless specified