As auto accidents and fatalities increase on America’s roads, 9 states enacted laws and three states have legislation on the governor’s desk to combat distracted driving by strengthening enforcement, increasing penalties and fines, and focusing on education and awareness efforts – particularly for teens, according to the Property Casualty Insurers Association of America (PCI).

“Even though most states have put in place laws that restrict texting while driving, more action is needed to address distracted driving and the sharp spike in crashes and traffic fatalities that have occurred over the past few years,” said Robert Passmore, PCI assistant vice president for personal lines policy. “While there is no single answer to addressing the problem of distracted driving, the new laws passed in 2017 are important because finding the solution to this epidemic involves enacting stronger laws, increasing enforcement, raising public awareness and creating a culture of personal responsibility. This is the roadmap to safer roads and fewer distracted driving accidents, injuries, and deaths.”

The states enacting laws in 2017 against distracted driving are taking a variety of approaches to the problem. Iowa and Washington have enacted two of the strongest laws against distracted driving in 2017. Iowa’s law moves from secondary to primary enforcement of the state’s texting ban law. Now police won’t need to wait to witness another driving infraction before they can pull over a texting driver.

“Laws in Washington and Arkansas broke new ground by expanding the definition of distracted driving to include many more dangerous behaviors that drivers engage in such as using Facebook, Instagram, YouTube and even Netflix,” said Passmore. “We need to make sure our laws are keeping up with the new behaviors that are making our roads deadlier.”

Texas was one of a handful of states without a ban on texting, but the Legislature recently sent a bill to Governor Abbot that would establish a statewide texting ban with primary enforcement. The bill would make the offense a misdemeanor punishable by a fine of not more than $99 for a first time offense or $200 for repeat offenders. If the Texas bill is signed 43 states and the District of Columbia will have primary enforcement of texting bans leaving only Arizona, Florida, Missouri, Montana, Nebraska, Ohio, and South Dakota with either secondary enforcement or no texting law. 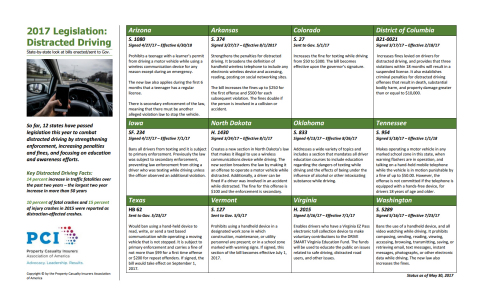 Arkansas, District of Columbia, North Dakota and Washington are cracking down by increasing fines for distracted driving. In Arkansas fines for texting will now be up to $250 for a first-time offender and $500 for a repeat offender. Additionally, fines will double if a driver involved in a crash is texting. Colorado also has legislation on the governor’s desk that increases penalties for texting while driving from $50 to $300. These fines reflect the seriousness of the violation.

Protecting teen drivers was the focus of legislation approved in Arizona, Oklahoma, Tennessee and Vermont. Arizona banned teenagers with a learner’s permit from driving while using a wireless communication device, Oklahoma mandated all driver education courses to include education regarding the dangers of texting while driving while Tennessee and Vermont passed laws to prohibit the use of handheld devices in school zones. The Vermont legislation is awaiting the governor’s signature.

Virginia also took action to further the educational activities of DRIVE SMART Virginia. Drivers will be able to make contributions to DRIVE SMART Virginia Education Fund through their EZ Pass electronic toll collection account. The funds will be used to educate the public on issues related to safe driving, distracted road users, and other issues.

“The 14 percent increase in traffic fatalities over the past two years – the largest two year increase in more than 50 years – highlights the importance of motorists, policymakers, and insurers working together to avoid unsafe driving behaviors and strengthen distracted driving laws,” said Passmore. “The tougher laws and awareness efforts passed this year are part of that effort to curb distracted driving and reverse the disturbing and dangerous trends on our highways and neighborhood streets.”

Click here to learn about the new distracted driving laws approved and enacted in 2017.