At a time of change and uncertainty across the country, American adults who have been affected by change at work are more likely to report chronic work stress, less likely to trust their employer and more likely to say they plan to leave the organization within the next year compared with those who haven’t been affected by organizational change, according to a survey released by the American Psychological Association.

Half of American workers (50 percent) say they have been affected by organizational changes in the last year, are currently being affected by organizational changes or expect to be affected by organizational changes in the next year, according to APA’s 2017 Work and Well-Being Survey. The survey was conducted online in March by Harris Poll among more than 1,500 U.S. adults who were employed full time, part time or self-employed. Workers experiencing recent or current change were more than twice as likely to report chronic work stress compared with employees who reported no recent, current or anticipated change (55 percent vs. 22 percent), and more than four times as likely to report experiencing physical health symptoms at work (34 percent vs. 8 percent). 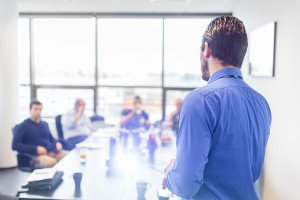 The survey findings also show how workplace changes may affect employees’ attitudes and experiences on the job. Workers who reported being affected by organizational change currently or within the past year reported lower levels of job satisfaction compared with employees who reported no recent, current or anticipated changes (71 percent vs. 81 percent). Working Americans who reported recent or current change were almost three times more likely to say they don’t trust their employer (34 percent vs. 12 percent) and more than three times as likely to say they intend to seek employment outside the organization within the next year (46 percent vs. 15 percent) compared with those with no recent, current or anticipated change.

Underlying employee reactions to organizational change may be their perceptions of the motivation behind those changes and the likelihood of success, according to the survey. Almost a third of U.S. workers said they were cynical when it comes to changes, reporting that they believed management had a hidden agenda (29 percent), that their motives and intentions were different from what they said (31 percent) and that they tried to cover up the real reasons for the changes (28 percent). Working Americans also appeared skeptical when it comes to the outcomes of organizational changes. Only 4 in 10 employees (43 percent) had confidence that changes would have the desired effects and almost 3 in 10 doubted that changes would work as intended and achieve their goals (28 percent each).

“Change is inevitable in organizations, and when it happens, leadership often underestimates the impact those changes have on employees,” said David W. Ballard, PsyD, MBA, head of APA’s Center for Organizational Excellence. “If they damage their relationship with employees, ratchet up stress levels and create a climate of negativity and cynicism in the process, managers can wind up undermining the very change efforts they’re trying to promote.”

APA’s annual Work and Well-Being Survey provides a snapshot of the U.S. workforce, including employee well-being and attitudes and opinions related to workplace policies and practices. Other key findings of the 2017 survey include:

“For organizations to successfully navigate turbulent times, they need resilient employees who can adapt to change,” Ballard said. “Disillusioned workers who are frustrated with change efforts, however, may begin to question leaders’ motives and resist further changes. To build trust and engagement, employers need to focus on building a psychologically healthy workplace where employees are actively involved in shaping the future and confident in their ability to succeed.”