A rise in jewelry store thefts in January, compared to prior months, was reported by the Jewelers’ Security Alliance, according to Jewelers’ Mutual Insurance Company.

The insurer often reports on jewelry store thefts and provides tips to thwart would-be thieves. A recent Jeweler’s Mutual Clarity blog post by Logan Moore, tallied 28 thefts for the month, which ranged from smash and grabs to a grab and run. 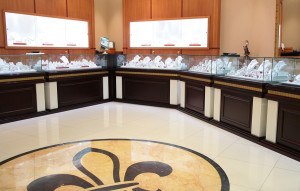 In one incident, two thieves struck during mall hours in San Antonio, brandishing weapons they used to smash jewelry store showcases. They escaped in a truck, according to witnesses. Video surveillance of the suspects, who remain at large, was captured by store cameras.

In two other posts, Moore offered tips on potential red flags that a jewelry theft may occur. These include an individual appearing nervous or fidgety, a group entering the store and then dispersing in different directions and an individual who appears interested in everything. According to Moore, a typical shopper either enters alone or as a couple.

Other tricks thieves may use to thwart jewelry store security include posing as an upscale client, posing as a delivery or repair person and making purchases over the phone or online. A thief may use the last example as a way to commit credit card fraud, something not covered by a standard jewelers block or businessowners policy, he said.