Injuries in the NFL decreased this season, including concussions.

Emphasizing that players are doing more self-reporting of head injuries, the league released data Thursday that show overall concussions for the preseason and regular season were down from 275 in 2015 to 244 in 2016. That includes a drop of 16 in regular-season games to 167.

The 275 diagnosed concussions in 2015 were a high over the past five years and were an increase of 69 over the previous season. But the NFL enhanced its detection and examination protocols in that span. 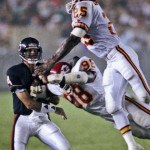 “What we have to account for, too, are the additional protocols involved and the people involved in recognizing the injuries,” NFL executive Jeff Miller said. “We have seen a significant culture change on those points” – players themselves or teammates identifying what they suspect could be head injuries.

“The point of all of this … is the effort to identify the concussions when they happen so players can get the treatment as quickly and comprehensively as they can. That is why we spend so much time on the protocols.”

Dr. Robert Heyer, president of the NFL Physicians Society and team internist for the Carolina Panthers, cited the players’ willingness to report injuries as making a major difference in the numbers.

“I have been a team physician 22 years, and in the past three years I think we’ve seen a cultural change regarding concussions,” Heyer said. “As result of ongoing education, players are more likely to speak up if they believe they might have a concussion. I know what we are doing is making a difference, but we must continue to do more.”

One unaffiliated neurological consultant working games is Dr. Mitchel Berger. His interactions with players on the sidelines have changed, he said.

“When we started the program, there was a significant amount of resistance from the players in terms of just being evaluated,” Berger said. “But now, I would say uniformly this past season, none of the players ever resisted. They are much, much more aware of the whole concussion situation and want to actively be engaged in the interview process on the sideline as well as in the locker room. They really are much more aware of and interested in their safety.”

There were only 71 reported concussions in the preseason, the lowest in the past five years. San Francisco 49ers owner Dr. John York, chairman of the NFL Owners’ Health and Safety Advisory Committee, said his group was concerned about the number of preseason practice concussions compared to the regular season. That number was 42 in 2014, and is down to 26.

“We went and discussed with the individual clubs the number of preseason concussions, and those discussions led to a significant decrease, over 30 percent, between 2014 and 2015, and that number has stabilized in 2016, actually, with the decrease of three,” York said. “So we’re happy those results shows that the clubs do listen and are very interested in the number of concussions in their players, and that we can have an effect on the culture of the National Football League.”

A rule change regarding player safety of moving the ball to the 25-yard line on touchbacks had little effect on diminishing concussions, with a drop from 20 to 17. That information will be presented to the league’s competition committee for evaluation, Miller said.

The NFL and players’ association worked with the health information research company QuintilesIMS in gathering the data.

The statistics also showed decreases in knee injuries from 2015-2016. Also of note was no conclusive evidence of more injuries on Thursday night games. The injury rate was less than from games played Saturday, Sunday and Monday.