The daily U.S. economic cost from solar storm-induced electricity blackouts could be in the tens of billions of dollars, with more than half the loss from indirect costs outside the blackout zone, according to a new study. 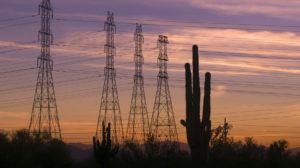 “On average the direct economic cost incurred from disruption to electricity represents only 49 percent of the total potential macroeconomic cost,” says the paper published in Space Weather, a journal of the American Geophysical Union. The paper was co-authored by researchers from the Cambridge Centre for Risk Studies at University of Cambridge Judge Business School; British Antarctic Survey; British Geological Survey and University of Cape Town.

Under the study’s most extreme blackout scenario, affecting 66 percent of the U.S. population, the daily domestic economic loss could total $41.5 billion plus an additional $7 billion loss through the international supply chain.

Electrical engineering experts are divided on the possible severity of blackouts caused by “Coronal Mass Ejections,” or magnetic solar fields ejected during solar flares and other eruptions. Some believe that outages would last only hours or a few days because electrical collapse of the transmission system would protect electricity generating facilities, while others fear blackouts could last weeks or months because those transmission networks could in fact be knocked out and need replacement.

Extreme space weather events occur often, but only sometimes affecting Earth. The best-known geomagnetic storm affected Quebec in 1989, sparking the electrical collapse of the Hydro-Quebec power grid and causing a widespread blackout for about nine hours.

There was a very severe solar storm in 1859 known as the “Carrington event” (after the name of a British astronomer). A widely cited 2012 paper by Pete Riley of Predictive Sciences Inc. said that the probability of another Carrington event occurring within the next decade is around 12 percent; a 2013 report by insurer Lloyd’s, produced in collaboration with Atmospheric and Environmental Research, said that while the probability of an extreme solar storm is “relatively low at any given time, it is almost inevitable that one will occur eventually.”

“We felt it was important to look at how extreme space weather may affect domestic U.S. production in various economic sectors, including manufacturing, government and finance, as well as the potential economic loss in other nations owing to supply chain linkages,” says study co-author Edward Oughton of the Cambridge Centre for Risk Studies at Cambridge Judge Business School. “It was surprising that there had been a lack of transparent research into these direct and indirect costs, given the uncertainty surrounding the vulnerability of electrical infrastructure to solar incidents.”

The study’s scope was guided by a July 2015 conference held at Cambridge Judge.

The study looks at three geographical scenarios for blackouts caused by extreme space weather, depending on the latitudes affected by different types of incidents.

Manufacturing is the U.S. economic sector most affected by those solar-induced blackouts, followed by government, finance and insurance, and property. Outside of the U.S., China would be most affected by the indirect cost of such U.S. blackouts, followed by Canada and Mexico – as “these countries provide a greater proportion of raw materials, and intermediate goods and services, used in production by U.S. firms.”