The National Insurance Crime Bureau (NICB) says new technology is being used to not only unlock and open vehicles, but to also start and steal them.

NICB recently obtained one of the so-called “mystery devices” that the public was first warned about over two years ago (release). At the time, thieves were being seen on security cameras across the country, using unknown devices to unlock vehicles and steal valuables inside. In recent months, NICB has noted reports of thieves not only opening the vehicles, but also starting them and driving away.

The device obtained by NICB was purchased via a third-party security expert from an overseas company. It was developed by engineers in an effort to provide manufacturers and other anti-theft organizations the ability to test the vulnerability of various vehicles’ systems. Called a “Relay Attack” unit, this particular model only works on cars and trucks that use a keyless remote and a push-button ignition. 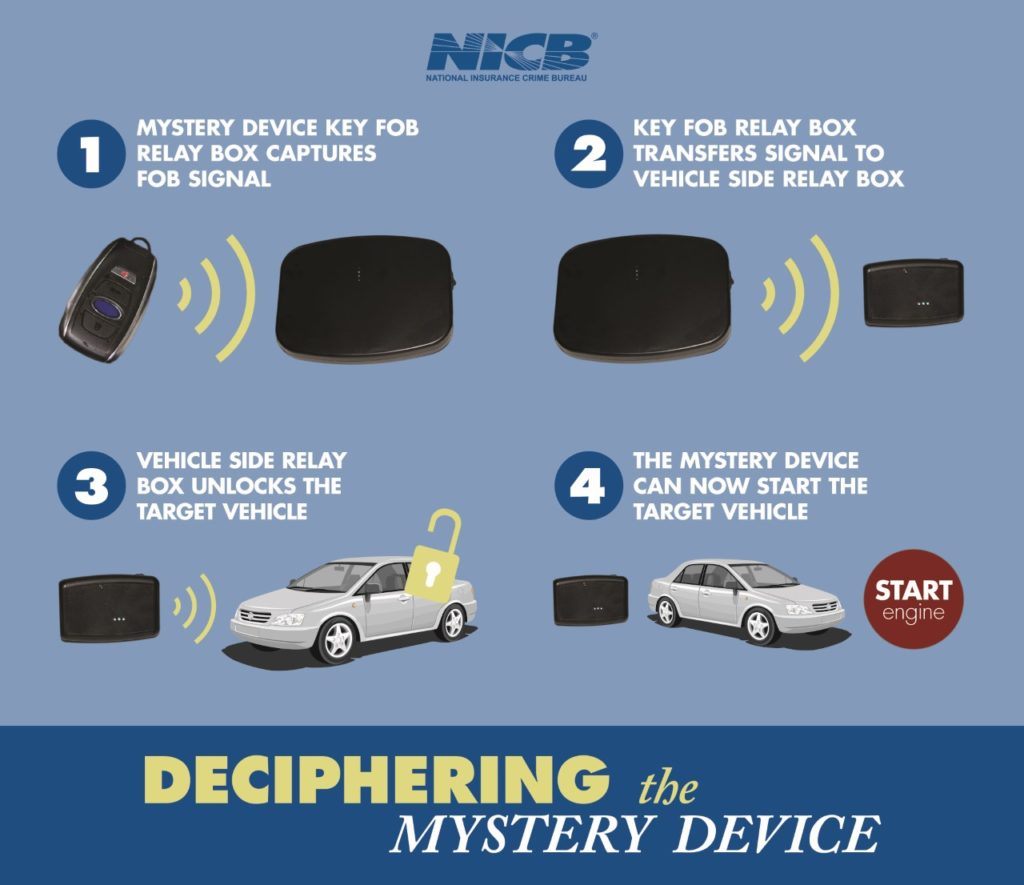 In a series of unscientific tests at different locations over a two-week period, 35 different makes and models of cars, SUVs, minivans and a pickup truck were tested. We partnered with NICB member company CarMax, because they are the nation’s largest used car retailer and have nearly every make and model in their inventory. Tests were also done at a new car dealership, an independent used car dealer, at an auto auction and on NICB employee vehicles and ones owned by private individuals.

The vehicles were tested to see if the device could:

NICB says there are a number of different devices believed to be offered for sale to thieves. Some use different technology and may work on different makes and models and ignition systems. More expensive models may have a greater range and better capabilities for opening and starting a vehicle.

“We’ve now seen for ourselves that these devices work,” said NICB President and CEO Joe Wehrle. “Maybe they don’t work on all makes and models, but certainly on enough that car thieves can target and steal them with relative ease. And the scary part is that there’s no warning or explanation for the owner. Unless someone catches the crime on a security camera, there’s no way for the owner or the police to really know what happened. Many times, they think the vehicle has been towed.”

Wehrle says it’s important for law enforcement officers to be aware of this threat and be on the lookout for thieves who may be using the technology.

According to NICB’s Chief Operating Officer Jim Schweitzer, who oversees all NICB investigations, vehicle manufacturers must continue their efforts to counter the attacks on anti-theft technology.

“Vehicles are a valuable commodity and thieves will continue to wage a tug of war with the manufacturers to find a way to steal them,” said Schweitzer. “Anti-theft technology has been a major factor in reducing the number of thefts over the past 25 years. The manufacturers have made tremendous strides with their technology, but now they have to adapt and develop countermeasures as threats like this surface.”

While there may not be an effective way of preventing this kind of theft at this time, NICB advises drivers to always lock their vehicles and take the remote fob or keys with them. Drivers should also be on the lookout for suspicious persons or activity and alert law enforcement rather than confronting a possible thief.

It’s also a good idea to never invite a break-in by leaving valuables in plain sight. And once thieves get inside, they can easily steal a garage door opener and valuable papers such as the vehicle registration that could lead them to your home. So take the garage door opener with you and take a picture of your registration on your cell phone rather than keeping it in the glove compartment.