Humans have always been frightened and fascinated by lightning. This month, NASA is scheduled to launch a new satellite that will provide the first nonstop, high-tech eye on lightning over the North American section of the planet.

University of Washington researchers have been tracking global lightning from the ground for more than a decade. Lightning is not only about public safety — lightning strike data have recently been introduced into weather prediction, and a new UW study shows ways to apply them in storm forecasts. 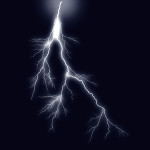 “When you see lots of lightning you know where the convection, or heat-driven upward motion, is the strongest, and that’s where the storm is the most intense,” said co-author Robert Holzworth, a UW professor of Earth and space sciences. “Almost all lightning occurs in clouds that have ice, and where there’s a strong updraft.”

The recent paper, published in the American Meteorological Society’s Journal of Atmospheric and Oceanic Technology, presents a new way to transform lightning strikes into weather-relevant information. The U.S. National Weather Service has begun to use lightning in its most sophisticated forecasts. This method, however, is more general and could be used in a wide variety of forecasting systems, anywhere in the world.
The authors tested their method on two cases: the summer 2012 derecho thunderstorm system that swept across the U.S., and a 2013 tornado that killed several people in the Midwest.
“Using lightning data to modify the air moisture was enough to dramatically improve the short-term forecast for a strong rain, wind and storm event,” said first author Ken Dixon, a former UW graduate student who now works for The Weather Company. His simple method might also improve medium-range forecasts, for more than a few days out, in parts of the world that have little or no ground-level observations.

The study used data from the UW-based WorldWide Lightning Location Network, which has a global record of lightning strikes going back to 2004. Director Holzworth is a plasma physicist who is interested in what happens in the outer edges of the atmosphere. But the network also sells its data to commercial and government agencies, and works with scientists at the UW and elsewhere.

A few years ago Holzworth joined forces with colleagues in the UW Department of Atmospheric Sciences to use lightning to improve forecasts for convective storms, the big storms that produce thunderstorms and tornadoes.

What’s missing is accurate, real-time information about air moisture content, temperature and wind speed in places where there are no ground stations.

“We have less skill for thunderstorms than for almost any other meteorological phenomenon,” said co-author Cliff Mass, a UW professor of atmospheric sciences. “This paper shows the promise of lightning information. The results show that lightning data has potential to improve high-resolution forecasts of thunderstorms and convection.”

The new method could be helpful in forecasting storms over the ocean, where no ground instruments exist. Better knowledge of lightning-heavy tropical ocean storms could improve weather forecasts far from the equator, Mass said, since many global weather systems originate in the tropics.

The study was funded by NASA and the National Oceanic and Atmospheric Administration. Greg Hakim, a UW professor of atmospheric sciences, is the other co-author.

The Worldwide Lightning Location Network began in 2003 with 25 detection sites. It now includes some 80 host sites at universities or government institutions around the world, from Finland to Antarctica.

The latest thinking on how lightning occurs is that ice particles within clouds separate into lighter and heavier pieces, and this creates charged regions within the cloud. If strong updrafts of wind make that altitude separation big enough, an electric current flows to cancel out the difference in charge.

A bolt of lightning creates an electromagnetic pulse that can travel a quarter way around the planet in a fraction of a second. Each lightning network site hosts an 8- to 12-foot antenna that registers frequencies in the 10 kilohertz band, and sends that information to a sound card on an Internet-connected laptop. When at least five stations record a pulse, computers at the UW register a lightning strike, and then triangulate the arrival times at different stations to pinpoint the location.

The network’s online map shows lightning strikes for the most recent 30 minutes in Google Earth. An alternate display shows the last 40 minutes of lightning in different parts of the world on top of NASA cloud maps, which are updated from satellites every 30 minutes. The program is the longest-running real-time global lightning location network, and it is operated by the research community as a global collaboration.

Lightning already kills hundreds of people every year. That threat may be growing — a recent study projected that lightning will become more frequent with climate change.

“The jury’s still out on any long-term changes until we have more data,” Holzworth said. “But there is anecdotal evidence that we’re seeing lightning strikes in places where people are not expecting it, which makes it more deadly.”

On Nov. 19, NASA is scheduled to launch the new GOES-R satellite that will be the first geostationary satellite to include an instrument to continuously watch for lightning pulses. Holzworth will help calibrate the new instrument, which uses brightness to identify lightning, against network data. NASA also funded the recent research as one of the potential applications for lightning observations.

“GOES-R will offer more precise, complete lightning observations over North and South America, which will supplement our global data,” Holzworth said. “This launch has been long anticipated in the lightning research community. It has the potential to improve our understanding of lightning, both as a hazard and as a forecasting tool.”

Hawaii Volcano Eruption has Some on Alert, Draws Onlookers