Owners of more than 300,000 Hondas have yet to get their airbags repaired, despite warnings from the automaker and regulators that the inflators have an extremely high chance of rupturing and causing injury or even death.

Last week authorities said one of those airbags, equipped with an inflator made by Takata Corp., ruptured and killed a California woman, adding urgency to the search for the noncompliant vehicles.

About 69 million Takata inflators have been recalled due to possible rupture. In June, government regulators said testing showed that inflators in 313,000 older Hondas and Acuras had as high as a 50 percent chance of rupturing in a crash. The regulators told owners of the cars to stop driving them and get them repaired. But four months later, only 13,000 of the cars have been repaired.

Takata uses ammonium nitrate to create an explosion to inflate airbags. But the chemical can deteriorate when exposed to heat and humidity and blow apart a metal canister, spewing shrapnel. The inflators have killed as many as 16 people worldwide and injured more than 100. The death of the California woman, Delia Robles, was the 11th tied to Takata inflators in the U.S. 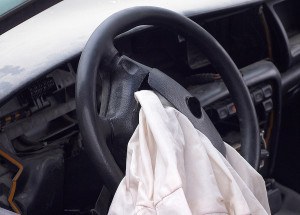 Honda says it has mailed letters, placed Facebook ads, made telephone calls, and in some instances has visited owners. But the results point out that major holes remain in the U.S. safety recall system because owners can be hard to find, particularly when it comes to used cars that have changed hands multiple times. And some owners refuse to get repairs done no matter how many times they are notified.

Safety advocates have called for laws banning the sale of any vehicle until recall repairs are made, or a national requirement that recalls be done before license plates can be renewed. But so far, there are few such requirements.

Sen. Bill Nelson, D-Florida, says Honda should do more. “No responsible automaker should be so slow in repairing defective vehicles where there’s up to a 50 percent chance a driver could be killed or seriously injured if an air bag deploys,” he said in a statement last week.

But Honda says it’s doing all it can. “It’s not for lack of unprecedented effort to try to reach these owners,” company spokesman Chris Martin said. Honda will pick up cars and drop off a loaner, says Martin, who adds that Honda has parts ready to repair all the dangerous cars.

Karl Brauer, executive publisher of Autotrader.com, says it’s hard for automakers to find owners of low-cost cars that are 10 or 15 years old, because many owners are young and move frequently or are immigrants who may have language barriers. Many cars have had four or more owners, making them harder to find.

But because these cars are so dangerous, Brauer says it’s time to either go to everyone’s home or take all 300,000 off the road.

NHTSA doesn’t have legal authority to order those steps, spokesman Bryan Thomas said. The agency knows that traditional ways of contacting owners haven’t been successful, and it’s working with Honda on new methods, he said without offering specifics.

NHTSA is seeking a rule requiring automakers to notify owners by e-mail and text message, measure that some automakers already take voluntarily.

Thomas said Honda has told the agency that many of the 300,000 cars have been scrapped, but the agency wants proof.

Robles, 50, of Corona, California, was killed Sept. 30 when her 2001 Honda Civic was hit head-on by a left-turning pickup truck as she was on her way to get a flu shot.

Honda’s Martin says she bought the car in mid-2015, likely from a small used-car dealer who purchased it two weeks earlier at an auction, which only dealers normally attend. While most automakers require new-car dealers to fix used cars subject to a recall, independent dealers don’t have to.

Honda mailed Robles multiple notices using an address from California registration data, Martin says. The car was first recalled in 2008, and since then, Honda has sent the four registered owners 20 letters, he says.

There’s no way for Honda to verify if Robles received the letters. Her son, Jose Contreras, said Friday that she never mentioned them to him.

Martin says it’s not practical for Honda to visit all the owners with super-dangerous inflators. But he and other Honda employees have gone to some homes.

Last summer in Torrance, California, Martin spotted a 2002 Acura TL with a dangerous airbag parked on a city street. He left business cards and even a personal letter on the windshield, but heard nothing. So he went to the owner’s nearby home. She didn’t speak English well and had her son speak to Martin. They set up an appointment for later this week to get the inflator replaced.