Ford Motor Co., which put the world on wheels a century ago, is now taking the driver out of the driver’s seat. The company said it plans to have a fully autonomous vehicle – no steering wheel, no gas or brake pedals – available by 2021 for ride-hailing services. 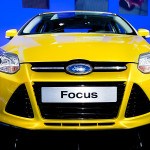 Like Alphabet Inc.’s Google, Ford will skip the interim steps of driver-assisted technology as a way to evolve toward full autonomy. Its plan to deploy self-driving cars in ride-hailing and ride-sharing fleets is similar to what General Motors Co. aims to do with Lyft Inc. Ford’s 2021 scheduled start matches BMW’s ambitious timeframe.

“We believe in our plan that taking the driver out of the loop is really important,” Fields said in an interview with Bloomberg Television. The automaker couldn’t find a sensible way through the “no-man’s land” – determining exactly when a robotic car should to try to re-engage a human driver in an emergency.

The second-biggest U.S. automaker didn’t say how many autonomous cars it plans to produce by 2021. Earlier Tuesday, Ford said it’s doubling the number of people at the Silicon Valley lab to 260 while expanding to two more buildings. It also invested $75 million in the leading maker of an advanced radar system to accelerate its development of self-driving cars.

There’s some catching up to do: Google’s self-driving car project has already amassed 1.8 million miles of public road testing. Ford said today it’s investing in or collaborating with four startups on autonomous vehicles, bringing its roster of such partnerships to 40.

Ford’s plan lacks specifics of how it will make this great leap to full automation, said Michelle Krebs, senior analyst for researcher Autotrader.

“I’m not seeing all the pieces of the puzzle in place because they don’t have a relationship with a ride hailing service like Uber or Lyft,” Krebs said. “It’s a first step and at least Wall Street will see that they’re working on this.”
Lidar Investment

Ford and China’s top search engine company, Baidu Inc., are each investing $75 million in Velodyne Lidar Inc., the automaker said today in a statement. Lidar bounces light off objects to assess shape and location, giving self-driving cars a 360-degree view of their environment with the help of cameras and traditional radar. Morgan Hill, California-based Velodyne said the money will help it improve design and expand production, making the sensors more affordable for mass adoption.

Ford wants “to do as much as they can internally, but also acknowledge that it’s best to partner with those who have the leading technology,” Jeff Schuster, an analyst at research firm LMC Automotive.

Ford also reiterated last month’s announcement that it was among five investors providing $6.6 million in seed funding for Civil Maps, a California startup that creates three-dimensional maps for driverless cars.

Since GM announced its acquisition of Cruise Automation in March, the staff at the company has grown to 100 from 40, said Kevin Kelly, a GM spokesman. GM is testing Cruise’s self-driving software on Chevy Bolt electric cars in Scottsdale, Arizona. GM also has a research lab in Palo Alto that employs about 12 people, Kelly said.

“Our goal is to use our autonomous technology in an on-demand ride-sharing network,” Kelly said. “Cruise paired perfectly with Lyft.”

Velodyne said it “expects an exponential increase in lidar sensor deployments” and that it will continue to work with top automotive and ride-sharing companies worldwide.

“We want the cost to be low enough to be used for all cars,” Marta Hall, Velodyne’s president of business development, said in the statement.