The waters are shallow and lifeguards are seemingly everywhere at the proliferating number of waterparks around the U.S. But the death over the weekend of a Kansas state lawmaker’s 10-year-old son on a waterslide billed as the world’s largest is the latest example that dangers lurk in the appealing slides and wave pools.

State Rep. Scott Schwab and his wife say their son, Caleb Thomas Schwab, died Sunday at the Schlitterbahn Waterpark in Kansas City. It opened in 2010, one of five waterparks operated by the New Braunfels, Texas-based corporation, Schlitterbahn Waterparks & Resorts. One of its most popular attractions, 168-foot-tall Verruckt, which means “insane” in German, opened in 2014.

The Kansas City park remained closed as the investigation into what caused the death on the waterslide continued. 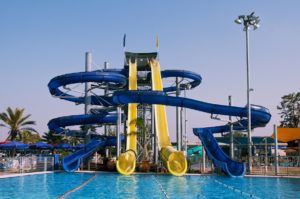 About 1,300 waterparks operated in North America a year ago, up about 30 percent from a decade ago, according to the trade group World Waterpark Association. Those parks attracted about 85 million people in 2015, compared to about 73 million in 2004. A growing segment of the industry has been municipal-run waterparks, as cities and counties look to boost revenue from what their flat-water pools deliver.

No figures are available for overall waterpark injuries, but the Red Cross cited U.S. Consumer Product Safety Commission estimates when it launched updated training efforts last year for lifeguards who work at waterparks. Those showed more than 4,200 people a year taken to emergency rooms to be treated for scrapes, concussions, broken limbs, spinal injuries and other such injuries suffered on public waterslides. Those numbers do not include other waterpark injuries or those who need lifeguard assistance without a hospital trip.

Drownings also occur. In July 2015, one drowning and at least three near-drownings were reported at U.S. waterparks.

As the parks proliferate, concern has grown about the risks present even when most of the water is shallower than 3 feet – people who aren’t good swimmers, especially young children, mixed with the unexpected hit of waves and falls that can lead to concussions or even drownings.

The Red Cross last year added training and certification specifically for extreme shallow water rescue. The Aquatic Attraction Lifeguarding course includes techniques for handling and removing people from water that is generally 3 feet deep or less, which can be different than in deep-water pools, and first-aid training emphasizing care for head, neck and spinal injuries. About 2,100 people took the courses last year, according to the Red Cross.

Regulations of water parks vary by state, but Kansas statutes leave it to its Department of Labor to adopt rules and regulations relating to certification and inspection of rides, adding that an amusement ride at a permanent location “shall be self-inspected by a qualified inspector at least every 12 months.”