Personnel at Volkswagen AG’s U.S. unit in Michigan destroyed evidence after the U.S. announced last year that the company had installed illegal devices on hundreds of thousands of vehicles to cheat emissions tests, a former employee said in a lawsuit.

Daniel Donovan, who worked as a technical project manager in Auburn Hills, Michigan, said he was fired in December after telling superiors, including the company’s in-house lawyers, that data was being deleted. Donovan, who had worked for VW since 2008, sued in state court last week, alleging wrongful termination and violation of Michigan’s whistle-blower law.

The deletion of data conflicted with an order Donovan received to preserve such information after the Sept. 18 announcement by the Environmental Protection Agency that VW had violated federal law by rigging vehicles sold in the U.S., he said in the complaint. 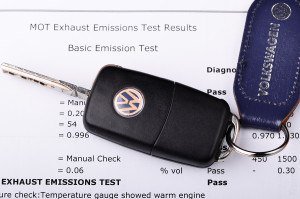 The company admitted installing cheating software in 11 million vehicles worldwide, including 482,000 sold in the U.S. VW later disclosed it had installed questionable emissions software in about 85,000 VW, Audi and Porsche cars with 3.0-liter diesel engines in the U.S.

Donovan’s immediate supervisor, Robert Arturi, told him on Sept. 18 the company had to “stop deleting data effective immediately pursuant to a Department of Justice hold,” connected to the U.S. investigation, he said in his complaint. When he relayed that message to the information technology manager, he was brushed off, Donovan said.

Data deletion continued for three more days, in violation of the order, and additional backup disks were destroyed afterward, Donovan said. An independent investigation by an accounting firm was thwarted, as evidence wasn’t provided, Donovan claimed in the suit. Sam Morgan, Donovan’s lawyer, declined to comment on the lawsuit.

“The circumstances of Mr. Donovan’s departure were unrelated to the diesel emissions issue,” Jeannine Ginivan, a VW spokeswoman, said by e-mail. “We believe his claim of wrongful termination is without merit.”

Michigan law permits legal action if an employee is fired in retaliation for refusing to break the law, according to the complaint. It also cites a state law protecting workers reporting or about to report a legal violation.