ACE paid approximately $29.5 billion in the aggregate in cash and stock, based on the most recent closing price of ACE Limited shares and the number of outstanding shares of The Chubb Corp. common stock at the time of closing Thursday.

Effective immediately, ACE is adopting the Chubb name globally and the company has begun trading today on the New York Stock Exchange under the symbol “CB.”

“ACE and Chubb are now one, and we could not be more excited about moving forward together with our new colleagues and our new brand,” said Evan G. Greenberg, chairman and CEO of Chubb Limited, after the closing.

The company said that the Chubb Limited parent company name will be official upon a publication from the Swiss Commercial Register, which is expected within a few days.

While the company commences business operations and marketing activities globally under the Chubb name effective immediately, the company said local ACE and Chubb

insurance companies around the globe will continue to operate with their current names pending local regulatory requirements and other considerations for effecting the transition to the new Chubb name. The transition has no impact on policies or coverage in force, the company said in a statement.

The company also unveiled a new logo that Greenberg said is a “simple expression” of the firm’s name, “with no extra symbols or visual distractions. It’s a simple, refined, modern expression of Chubb.” 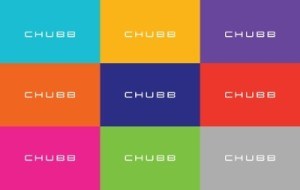 The new Chubb brand logo will be used in nine different colors. “These colors reflect the diversity and energy of our culture, our thinking, global presence, the many different customers we serve and the many products we offer,” Greenberg said.

The new Chubb balance sheet’s size and strength elevates the combined company into the elite group of global P/C insurers. As of December 31, 2014, on an aggregate basis, the combined company had total shareholders’ equity of nearly $46 billion and cash, investments and other assets of $150 billion.

The new Chubb ranks second among U.S. commercial lines insurers and is also he U.S. leader in high-net-worth personal lines coverage. It will also be the leading global professional lines player, and the combined entity will represent more than $31 billion in net written premiums for all product lines combined globally (based on 2014 year-end figures).

How They Stack Up: Analysis of Chubb’s Future Position in P/C Product Lines

After the deal was announce last July, both sides moved quickly to integrate their operations, something that ACE Chairman and CEO Evan Greenberg, who is chairman and CEO of the new Chubb, said reflected well on future plans and goals.

“Since the transaction was announced six months ago, we have moved rapidly and deliberately with integration planning,” Greenberg said in prepared remarks. “This process has given us great confidence in the potential of the new Chubb to create significant value over time.”

The company has made a series of announcements of leadership and management changes for the combined entity. These include designating the North America claims team headed by Jeffery Miller and Douglas Poetzsch.

Greenberg has said that the deal took only two weeks to hash out but he has acknowledged that fully integrating the two organization requires a long-term commitment that could take years.

The combined company will remain a Swiss company with principal offices in Zurich.

While Greenberg is assuming leadership of the new entity, Chubb CEO John Finnegan, who planned on retiring at the end of 2016, will serve as executive vice chairman for External Affairs of North America and will assist with integration.

The company’s board is being expanded from 14 directors to 18 directors with the addition of four independent directors from Chubb’s current board.

Greenberg has said that the combined company will preserve the independent agency culture prevalent at the old Chubb.

The new company will adopt the best of both companies and Chubb’s agency system is better than ACE’s, whereas ACE is better at brokerage, Greenberg said during a webcast for Chubb employees from around the globe on July 20.

The plan for the new company calls for not only keeping the agency distribution and branch structure of Chubb but also growing this distribution channel with new products and customers, he said.

The ACE CEO has no plans to change the contingent commission system – to do so he’d have “to be stupid” or have “rocks” in his head, he said. Some insurers pay contingent commissions to agents for achieving certain goals with the insurer, such as placing a particular amount of business, retaining a number of policies or achieving a particular loss ratio.

Drugmakers, Pharmacies Next Targets for US Opioid Settlements