In its annual “Most Wanted” list, the National Transportation Safety Board is urging government regulators and industry to move more quickly to adopt equipment that automatically hits the brakes on cars, trucks and trains, as well as devices that monitor operators with video. 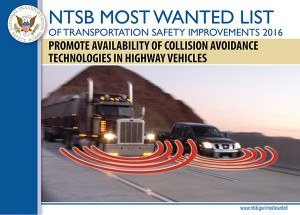 In some cases, the technologies are offered by automakers but come only on more expensive vehicles.

“The difficulty is some of this technology, which is highly effective at reducing rear-end collisions, is not available or is not available as standard equipment,” NTSB board member Earl Weener said Wednesday at a press conference. “Many times you have to buy a high-end luxury package in order to get the safety equipment.”

New technology can be a double-edged sword, NTSB Chairman Christopher Hart said. The NTSB also wants drivers, pilots and train engineers to shut off distracting technologies, such as smartphones and other digital displays that have been repeatedly linked to fatal accidents.

The NTSB’s 2016 list included nine areas the safety board believes are a priority to improve transportation safety. They include issues on which the agency has long advocated, such as boosting use of seatbelts, decreasing drug and alcohol impairment and cutting operator fatigue.

In addition, the NTSB is calling for swifter adoption of automated devices that prevent accidents.

“I do see that as a growing trend through all the modes,” Hart said. “Humans on their best days can make mistakes. These technology solutions are safety nets for when humans make mistakes.”

On roadways, the safety board wants automatic braking, lane-departure warnings and systems that monitor vehicles in drivers’ blind spots. While these features are offered on some vehicles, they often come only on the costliest.

The NTSB cited a 2011 study by the Insurance Institute for Highway Safety that concluded more than 10,000 fatal accidents a year might be prevented or reduced in severity if those devices were in all vehicles.

“Motor vehicle crashes continue to be a leading cause of death and injuries in the United States, killing more than 32,000 each year on average,” the NTSB said. “Yet currently available technologies could prevent many crashes.”

Technology known as “positive train control” could perform a similar function on railroads and would have prevented the May 12 derailment of an Amtrak train in Philadelphia that killed eight people and injured more than 200, according to the safety board.

Congress last year granted railroads a reprieve from a requirement for positive train control by the end of 2015, extending the deadline until 2018. The NTSB called for no more delays.

As the cost and size of video recording equipment has shrunk, it is now feasible to equip commercial motor vehicles, trains, aircraft and ships with these devices, according to the NTSB. The safety board has increasingly found video recordings help it understand how accidents occurred, but there are no requirements for them so they’re rarely installed.