“Concussion” delivers a hard hit to the NFL as it deals with data linking repeated blows to the heads of its players to dementia and a host of other problems.

The league’s rocky dealings with Dr. Bennet Omalu, who identified a degenerative disease in football players known as CTE, or chronic traumatic encephalopathy, are the focus of the movie’s second hour.

Starring Will Smith and Alec Baldwin, “Concussion” had its premiere Tuesday night at AFI Fest in Hollywood. Among the audience at the TCL Chinese Theatre was the wife of Justin Strzelczyk, the Steelers offensive lineman killed in a car crash, and the wife and daughter of Hall of Fame linebacker Junior Seau, who shot himself to death. Strzelczyk was later found to have brain damage, while Seau had CTE. 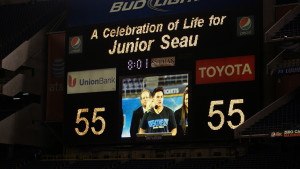 Smith plays Omalu, a Nigerian-born forensic pathologist in Pittsburgh who knows nothing about football when he performs the autopsy on former Steelers center Mike Webster. Omalu discovers CTE in Webster’s brain, setting him on a journey that exposes the concussion crisis.

Omalu quickly finds the NFL demanding he retract his CTE findings while accusing him of fraud. The doctor is the target of threatening phone calls and his wife is followed while driving alone.

The movie names real people and uses footage from real NFL games showing the kind of blows to the head that can injure and permanently damage players.

Bailes tells Omalu the summit was staged so the NFL can say it listened.

“The league has kept everyone in the dark,” says Bailes, who explains he was chosen to speak because he was “one of the league’s own.”

At league offices in New York, grim-faced executives are informed of newspaper stories about CTE that are on the front page, not relegated to the sports or science sections.

Former NFL safety Dave Duerson, who worked for the league, is shown rejecting desperate pleas for help from Andre Waters, a hard-hitting safety who said his mind wasn’t right. Both Duerson and Waters died from self-inflicted gunshot wounds. Duerson was found to have evidence of CTE, while Waters had brain damage.

The movie ends with news of Seau’s death followed by statistics of the toll CTE has taken on NFL players and the concussion lawsuit filed by dozens of retired players.

Director Peter Landesman again denied a recent New York Times report that the movie was altered to placate the NFL.

“It’s almost laughable,” he said on the red carpet. “Anybody who sees this movie knows this movie is a shot between the eyes of the NFL. Not because we’re going after the NFL. Just because the truth is our defense you know and it’s a powerful movie about human beings. It’s not a hit piece about corporate America.”

The movie reveals nothing new about the long-term implications of repeated blows to the head. Its focus is on Omalu’s struggle to tell the truth and the tragic deaths of men who played the billion-dollar sport that is America’s favorite.

“The only criticism we’ve received is from people who haven’t seen the movie,” Landesman said during a post-screening Q & A. “None of us wanted the movie to be confrontational or judgmental. Everyone has a point of view. I love football. We’re not out to wag our finger and say don’t do it.”