Booster seat-aged children are twice as likely to suffer serious injury or death in a car crash than younger children but a new study shows they may be less likely to have car seats inspected for proper use.

Less than a quarter of car seat and booster checks analyzed in the new University of Michigan Health System study were conducted in children ages four and older at car seat inspection stations in Michigan. Just 1 in 10, or 11 percent of inspections, covered booster seat-age children ages 4-7 while half were for rear-facing car seats. 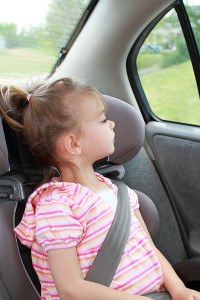 The findings, which appear in this month’s issue of The Journal of Trauma, also show that roughly a third of booster seat-age children who did have seats checked left an inspection in a safer restraint than when they arrived.

“We know that older kids are at particular risk of injury from a car crash. Our study suggests it may be beneficial for certified child passenger safety technicians to focus more on providing education and guidance on prolonged use of booster seats.”

Unintentional injury remains the leading cause of death and disability for children over the age of one in the U.S. Children ages 4-12 are more likely to suffer significant abdominal injuries as a result of switching from booster seats to seatbelts too soon. These injuries, known as ‘seat belt syndrome’, include intra-abdominal, spinal cord, and facial injuries.

Booster seats have been shown to reduce the risk of serious injury by 45 percent in children aged 4-8 when compared with seat belt use alone but there are reportedly lower rates of proper restraint use among older kids. Authors point to such factors as lack of knowledge about the safety benefits of booster seats and risk to child passengers.

“Study after study shows that caregivers often need support and direction when choosing and installing child restraints and that they are often using them incorrectly, which puts child passengers at unnecessary risk of harm,” says lead author Amber Kroeker, M.P.H., who was with CHEAR at the time of the study.

“This gap can be addressed in car seat inspections, which are free and offered in most communities, but our findings indicate low use of this service by parents of older children.”

In a recent survey of 1000 parents by Safe Kids Worldwide, seven out of ten parents did not know that optimal vehicle belt fit may not be obtained until a child reaches a height of 57 inches, and nine out of ten parents prematurely transition their child from a booster seat to a vehicle seat belt.

“Injury risk in motor vehicle accidents has been dramatically reduced for infants and toddlers because of an increased focus on proper restraints,” Kroeker says. “We want to see the same outcomes for older children.”