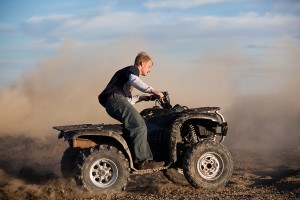 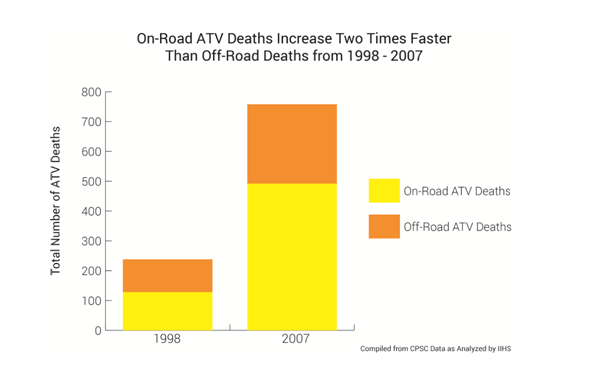 Of the 357 documented crashes, 335 could be identified as on or off-road incidents. Of those fatalities 193, or 58 percent, took place on roads—a surface that OHVs are not designed for and cannot be safely operated on.

“Though there has been a decade long trend toward states, counties and municipalities opening up roads to OHV use that does not mean it is a safe behavior—which these numbers prove,” said Michael Best, senior policy advocate at the Consumer Federation of America.

It is dangerous to ride on roads of any type. Dr. Charles Jennissen, co-author of the recent study, All-Terrain Vehicle Fatalities on Paved Roads, Unpaved Roads, and Off-Road: Evidence for Informed Roadway Safety Warnings and Legislation, said that “ATVs are not safe on any public road surface, whether it is paved or gravel. Our research shows that 42 percent of the total 6,625 roadway deaths from 1982 to 2012 occurred on unpaved roads. Unpaved roads are not a safe alternative to driving ATVs on blacktop.”

According to the CFA and its off-highway vehicle safety coalition, 79 children under 16 years of age have lost their lives to OHV crashes so far this year.

“There are three additional critical safe riding practices to follow when riding OHVs,” said Rachel Weintraub, legislative director and general counsel of Consumer Federation of America. “Never permit children younger than 16 years old to operate an adult-size OHV or any OHV that is too large and too powerful for them, always wear a helmet and other protective gear when riding an OHV and never allow more people on an OHV than it was designed to carry.”