In June this year a robot crushed a man to death in a Volkswagen factory in Germany. The 22-year-old maintenance worker became trapped between a large robotic arm and a metal plate, in an area usually off-bounds to humans.

The tragic incident highlighted a major technological challenge: As we move towards an increasingly automated world, how do we reach a point where robots and humans can exist side- by-side, sharing space and collaborating on tasks? 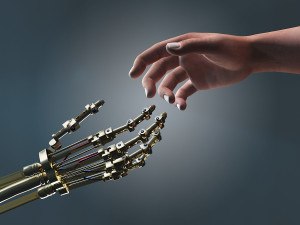 Carmakers and aerospace giants – already heavily automated – have been the earliest adopters, with BAE Systems earlier this month announcing plans to use cobotics to build warplanes.

As it stands, industrial robots are far too dangerous to share space with humans – having been linked to more than 20 fatal accidents in the U.S. alone – and so tend to be shielded by large screens.

“They are great at moving heavy things at high speeds for monotonous jobs, but they move blindly with no intelligence. If they make contact with a human it can cause a serious injury and people can get killed,” says José Saenz, from Germany’s Fraunhofer Institute for Factory Operation and Automation.

Unlike older generations of robots, “cobots” have sensors and safety features that let them detect and react to nearby humans. This allows for the perfect pairing: the machines’ strength and precision with employees’ ability to see, feel, think and adapt.

It’s an amicable relationship for now because humans have skills that are very difficult to program. “There’s a lot of experience and unwritten knowledge that you can’t codify. So a worker might know something doesn’t feel right, or a drill vibrated in the wrong way or something felt too gritty,” explains Saenz. “Try writing that into a document you can use to program a robot.”

One of the forerunners of cobotics is BMW. In 2013 the company installed robots, made by Denmark’s Universal Robots, in its South Carolina factory to help human workers insulate and water-seal car doors. The robot spreads and glues the material down while the human holds it in place. Without the robot, it’s a physically uncomfortable task that leads to wrist injuries.

“We’re interested in ergonomics and safety. A robot can do repetitive tasks like pushing or pulling without getting injured and having to come off the assembly line,” says BMW’s Rich Morris, who heads up assembly and logistics. “The robots work next to associates and they love it.”

What happens if a human gets too close to the machine? “First it tells you you’re getting too close,” he says, “and then it stops.”

This year, robots have been brought in to perform another ergonomically taxing task: inserting stiff rubber plugs into holes within a vehicle’s chassis. “So many people were getting thumb injuries,” explains Morris. Initially BMW developed 3D- printed exoskeletons to support the digit, but now cobots with mechanical super-thumbs have taken over.

The most advanced cobots are functionally flexible, so the same model can easily switch between range of tasks including sorting, loading and handling materials.
Baxter, by Rethink Robotics, has two arms and an animated face on a head-like screen.

‘He’ can be taught to carry out tasks through demonstration: The human manipulates the arms into a sequence of positions once, and the machine will then repeat the action. The on-screen facial expressions help flag to nearby humans what the machine is focused on and when it’s confused by something unexpected.

The first Baxter to work outside of the research laboratory was at Australian confectionary giant Haigh’s Chocolates in February 2015. There, ‘he’ works uncaged alongside employees picking up chocolate with suction pumps from the production line.Dexterity and precision

The next frontier for collaborative robots is consumer electronics, a sector that’s currently very heavily dependent on manual assembly.

In March this year Baxter got a one-armed little brother called Sawyer, designed for more delicate activities such as circuit board testing and machine tending.

At the same time Zurich-headquartered ABB launched YuMi, a robot packed with sensors and so precise it can thread a needle.

“This is critical to minimizing the footprint on the factory floor and also makes it possible to install the robot into the work stations currently used only by humans,” explains Steven Wyatt, head of marketing and sales at ABB.

Once cobots are well established and tested in industry, they’ll start to appear in the domestic environment, but this will present unique challenges.

“In an industrial environment people are over 18, consenting to work there and wearing safety glasses and shoes. In the home things get more tricky, with pets and babies crawling around the floor,” says Saenz. “But the market is even larger.”