With an El Nino growing in the Pacific Ocean and climate change spurring global temperatures ever higher, almost nothing can stop Earth from breaking 2014’s mark for the warmest year on record.

The average annual temperature last year was about 1.24 degrees Fahrenheit (0.7 Celsius) above the 20th century average, making it the warmest year in records going back to 1880, according to the U.S. National Centers for Environmental Information. Through July, 2015 is on pace to surpass that. 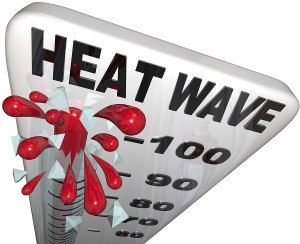 “It is global warming, and the El Nino that is enhancing global temperatures,” said Jessica Blunden, a climatologist with ERT Inc. working at the agency in Asheville, North Carolina. “The likelihood that 2015 will fall lower than 2014 get smaller and smaller every month you go forward.”

The record set in 2014 marked the third time in the 21st century a new high annual temperature was set or tied and the 38th consecutive year that annual temperatures exceeded the long-term average. Nine of 10 of the warmest years have occurred since 2002.

If 2015 sets a new mark, it will be the first time back-to- back records have been set since 1997-98, Blunden said. Those two years were also when the strongest El Nino, a warming of the equatorial Pacific Ocean, occurred in records going back to 1950.

There is a 85 percent chance the El Nino will last into the February-April period, the U.S. Climate Prediction Center said last week. There is also a strong possibility it will be one of the most intense in the last 65 years.

Blunden said the fact that 2015 is trending even warmer than during the last strong El Nino shows that all the heat in the world isn’t caused by the ocean. When you take away the El Ninos, temperatures will still likely be higher in 2015, she said.

“Climate change is happening,” Blunden said in a telephone interview. “There are underlying trends with global warming.”

In addition to the period from January through July being the warmest on record, July was the warmest month ever recorded on Earth since 1880, the NCEI said Thursday.
“It’s reaffirming what we already know: the world is warming,” Jake Crouch, a physical scientist at the center, said in a conference call with reporters. “It’s time for us to start looking at what are the impacts of that.”

A separate paper released Thursday said about a fifth of California’s drought can be attributed to climate change.

Underground water supplies have been evaporating faster than they would have without the higher temperatures caused by greenhouse-gas emissions, according to the study published in the journal of Geophysical Research Letters.

The NCEI’s monthly analysis showed Austria had its warmest July in records going back to 1767, Crouch said. The average temperature there was 4.9 degrees Fahrenheit higher than the mark set in 2006.

Heat waves also gripped parts of the U.K., the Netherlands, Sweden and France, which experienced its third-hottest July. In the Arctic, sea ice for July was 350,000 square miles, or the eighth-smallest extent since records began in 1979. Conversely, in Antarctica, where it is winter, sea ice grew to its fourth- largest mass ever.

The heat felt around the world has been largely absent in the eastern half of the U.S. Blunden said people living in the area shouldn’t take comfort from that because the impacts of climate change will be felt by everyone.

The cooler temperatures there are driven by changes in the jet stream, which are probably caused by climate change.

“You have to realize, it’s not just what is happening in your backyard,” Blunden said. “The takeaway from that is, people need to look at the global scale. Climate change is going to be different everywhere.”

Greenhouse gases in the atmosphere trap heat and cause the Earth’s temperatures to rise.

There is natural variability in temperatures from year to year, but the overall trend is up, she said. Climate-change skeptics have said that the climb in world temperatures leveled off since 1998.

“The bottom line though, is it’s not just about the temperatures, it’s about the changes we are seeing happening,” Blunden said. “Sea-level rise is caused by climate change and it ’s real. Glaciers are melting faster than they ever have since we have been keeping records. Eventually, it’s going to affect everybody in one way or another.”

(With assistance from Christopher Martin in New York.)