David Beckham may have more of an influence on you than you think.

According to analysis by Black Book, the prevalence of modern and classic luxury cars on social media platforms like Instagram directly influences their resale value. So when celebrities such as Beckham, Kendall Jenner, or Dwyane Wade post photos that include their cool new whip, whether modern or classic, people notice. And they act accordingly.

“A new, younger generation of collectors has taken to this genre of exotic sports cars, and auction prices are going for a ride,” the report says. “Social networking has a lot to do with this activity.” 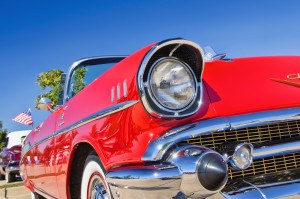 That differs from previous decades when only true superstars—Frank Sinatra, Marilyn Monroe, Roger Staubach—could afford exotic cars. And what’s more, most of those who could afford them stayed discreet. There weren’t many ways to casually publicize their prized possessions, anyway.

But these days, even bench-riding power forwards and third- string quarterbacks make enough to afford a Ferrari or a Bentley. And they have the methods to show it off.

“The consumption has become so much more conspicuous,” Lawrence says. “You have guys Instagramming shots of themselves hitting golf balls off the roof of their Bentley.”

From 1977 through 2008, the Aston Martin DB5 coupe, the Ferrari 250 GTL, and the Mercedes-Benz 300SL Gullwing—three of the most iconic cars on the planet—appreciated in value 5 percent annually. Each year since 2008, they’ve appreciated as much as 60 percent. That means if you bought a cherry-red Ferrari 250 in 1977, it will likely fetch more than $1.8 million at auction today.

But “there are factors way beyond social media driving this market,” says McKeel Hagerty, the founder of Hagerty Insurance, which creates coverage for classic and collectible cars.

He points to the economic recovery after the recession as the driving force behind the vintage car market’s explosive growth. Still, “evidence does suggest that automobiles feature prominently in Facebook photographs—kids come first, then pets, then cars.”

Of course, most old-money and ultrawealthy collectors don’t use social media at all. And Lawrence notes that the Black Book study is based on trend forecasting and opinion analysis by his team of experts, who track this market on a daily basis. It’s really the second tier of the very rich—multimillionaires and the newly minted industrialists—who he believes are most susceptible to the so-called Instagram effect.

What’s without question is that the combination of unprecedented youth of today’s buyers and the massive amount of wealth currently circulated around the globe have prompted major production increases at luxury automakers such as Ferrari and Lamborghini.

They form a growing new enthusiast and collector market filled with millennials and Gen Xers who are able to spend serious cash on a whim. But it’s got to be top-end stuff that makes it to Instagram—Astons, Ferraris, that vintage Gullwing. Nobody is going to want to show off a Mercedes C-Class.

“Between stock options and new industries coming online, within the tech industry you’ve got so many people in their 20s and 30s who are multimillionaires,” Lawrence says.

“These people are of the age where they don’t mind spending—but it’s got to be good, probably exotic. And when they do spend, they want everyone to know about it. It’s got to reaffirm who they are.” (Exhibit A: This clip from the show Silicon Valley.)Plenty of Money

As for the wealth index, Bloomberg has discovered nearly four dozen new billionaires in the world since January. It’s unearthed more than 300 since 2012.

“There’s room up there, significant room, and it’s growing,” says Jack Nerad, the executive market analyst for Kelley Blue Book. “People who are super rich want to show [their wealth] as a badge. One way to do that is with your cars.”

In this world, exclusivity is the ultimate goal. So it’s essential that the car is rare. Think one-off Rolls-Royces, Spykers, Bugattis, Paganis, Koenigseggs.

Of course, “rare” is becoming a relative term.

“Lamborghini has sold more cars in the last 10 years than they sold in the past 40 combined,” Hagerty says. “They went from making a few hundred a year in the ’70s to making thousands last year.”

Not that anyone is complaining, he adds. “The bottom line is, whether it’s through social media or something else, those cars are going to find homes.”