Motorcoach interiors should be designed with improved flammability requirements and better emergency exits, and event data recorders should be installed on commercial trucks and motorcoaches, according to recommendations by the National Transportation Safety Board. The recommendations resulted from the investigation of the truck-motorcoach collision that resulted in 10 fatalities in Orland, California on April 10, 2014.

Investigators were unable to determine why the truck crossed the median, but they ruled out truck and motorcoach driver experience, licensing and training, as well as alcohol and drug use, mechanical factors, and weather as causes of the crash. Likewise, the agency found no evidence that the driver was experiencing distraction, fatigue, or that he intentionally crossed into opposing traffic.

“The investigation brought to light the difficulty of getting out of a burning motorcoach,” said NTSB Chairman Hart. “It is unacceptable for anyone who survives a crash to perish in a post-crash fire because the exits were too hard to find or too difficult to use.”

The investigation revealed inadequacies in the fire performance standards for commercial passenger vehicle interiors, Federal Motor Vehicle Safety Standard (FMVSS) 302. The flammability testing under FMVSS 302 involves a small-scale fire source, such as those that might be caused by matches or cigarettes – which differ drastically from the actual common causes of bus fires. 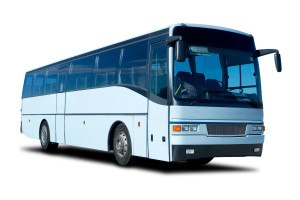 The Board also found that neither the motorcoach driver who initiated the trip nor the relief driver gave a safety briefing or played the prerecorded safety briefing that the company had provided, and many passengers struggled to locate and open the emergency exit windows. At least two passengers died because they could not exit the motorcoach before succumbing to asphyxiation due to inhaling smoke from the fire.

A pre-trip safety briefing or a video about evacuation could have expedited the evacuation process and possibly saved lives and mitigated injuries. The Board has also found that the windows on the accident motorcoach, from which escaping passengers had to jump, were more than seven feet off the ground – higher than the wings of some airplanes – and did not have a mechanism to keep them open. The Board concluded that current standards lack adequate requirements for emergency lighting and signage and reiterated several longstanding previous recommendations for standards that that would require independently powered lighting fixtures, use of photo luminescent material to mark emergency exits, and windows that remain open after being opened for emergency evacuations. The Board also concluded that having a secondary door for use as an emergency exit would expedite evacuations and reduce the potential for injuries caused by jumping from window exits.

Hart said that neither the truck-tractor nor the motorcoach had event data recorders, which impeded the investigation of the accident’s cause.

“With access to event data recorders, we might have been able to determine why the truck crossed the median, which could have enabled us to make recommendations to prevent it from happening again,” Hart said. “Much of the reason that aviation is so safe today is that we have required such recorders for decades so that we can learn the lessons of accidents. But they are still not required in commercial trucks or motorcoaches despite more than a decade of recommendations by the NTSB.”

As a result of the investigation, the NTSB issued safety recommendations regarding commercial passenger vehicles to the National Highway Traffic Safety Administration and the Federal Motor Carrier Safety Administration that address the fire performance standards; pretrip safety briefings; improving vehicle design to facilitate evacuations; requiring the development of minimum performance standards for event data recorders in trucks and motorcoaches; and requiring them to be installed in these vehicles.