A group of scientists checked a decade’s worth of data about what causes concussions in U.S. high school soccer. Their conclusion: While a ban on heading would help decrease head injuries, what the game really needs is better enforcement of rules restricting all sorts of player-to-player contact.

A paper published on Monday by a group of Denver-area doctors sheds a different light on what results might come from a campaign led by U.S. international Brandi Chastain and other women soccer stars to ban headers for players 14 and under. 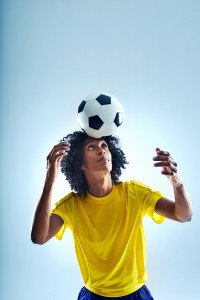 The paper, appearing in JAMA Pediatrics, was based on data collected since 2005 involving more than 1,000 high school soccer concussions. It concluded that by banning headers in youth soccer, about 30 percent of concussions could be avoided, but that a far larger decrease could be possible if rules that limit player-to-player contact were more stringently enforced.

“A lot of people felt, if we could get a ban on heading, we could keep some people safe,” said Dawn Comstock, an epidemiologist with the Colorado School of Public Health at the University of Colorado Anschutz Medical Campus. “My question was, is there any evidence out there that supports that?”

Coinciding with the Women’s World Cup, concussion experts teamed with Chastain and other women soccer players to make a big public push for the Safer Soccer initiative. They cited a study that tracked 59 concussions to junior high girls in Washington State, and concluded that about 30 percent of those injuries could be eliminated if heading were banned. That extrapolates to a potential of around 100,000 concussions avoided over a three-year period.

Comstock’s numbers were similar but were collected as part of her extensive nine-year-old project that charts all sorts of injuries suffered by high school athletes in several sports, including soccer. The majority of the players she surveys fall outside the age group targeted by Safer Soccer, but Comstock called it the closest thing to a full data set that’s available on the subject.

“It’s very important to understand where we are, and we are not talking about the high school level,” said Robert Cantu, one of the country’s leading concussion experts, who helped spearhead the Safer Soccer project. We’re not asking for heading to be taken out at the high school level. She thinks a greater good could be achieved by taking rough play out, altogether.”

Among the authors’ concerns is that the ban could lead to a different set of injuries as players move differently to avoid contacting the ball with their head.

They wondered about the efficacy of changing the fundamental nature of the game by eliminating a key element: “It’s like me walking into a football rules meeting and saying, ‘I can make your game much, much safer. Just get rid of tackling,”‘ Comstock said.

And they wondered about the 14-year-old cutoff point, which is a common dividing point for youth leagues: “I don’t see how banning heading for a 12-year-old makes a 15-year-old any safer,” said one of the authors, Sarah Fields, who studies sports in American culture.

Cantu conceded there was no perfect cut-off point. He said the ages 8 to 14 are when the brain is most vulnerable, and when much of the most important brain growth occurs.

Fields also decried what she called a “paternalistic attitude” toward girls. Among her complaints on that subject is the lack of male soccer stars supporting the movement.

“We spent decades trying to get girls access to sports,” Fields said. “To now say, ‘Tone it down,’ because the premise is that they were too physically frail and the sport is too dangerous, that would be dangerous for girls.”

Chris Nowinski, the one-time WWE wrestler who became a leading voice in the concussion prevention effort, said Safer Soccer isn’t trying to single out girls. Though women soccer players are leading the campaign, Nowinski said some high-profile male players will join the Safer Soccer cause soon.

For years, Comstock and her co-authors have been leaders in the study and prevention of concussions in many sports, though this latest paper seems to put them on opposite sides from the Safer Soccer leaders.

“It does seem logical to say, ‘If most concussions occur during heading, let’s stop heading,”‘ she said. “I understand the movement. But we have more data, and we can look at this in more detail.”