The decision by U.S. District Judge Rodney Gilstrap in Marshall, Texas, caps Trinity’s three-year legal battle with a small competitor in a case that raised doubts about highway safety across the country. 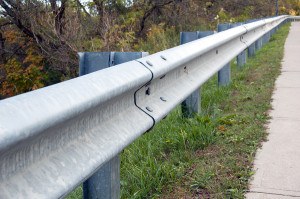 Gilstrap on Tuesday added a $138 million penalty to a verdict last year in a federal trial. Jurors concluded that Trinity cheated the government by selling its ET-Plus guardrail system without disclosing changes made in 2005. The company has said it plans to appeal.

“We believe the evidence clearly shows that no fraud was committed,” Jeff Eller, a Trinity spokesman, said in an e-mail after the ruling. “The trial court made significant errors in applying the federal law to the plaintiff’s allegations and, therefore, the judgment is erroneous and should be reversed.”

Gilstrap in a related ruling rejected Trinity’s request to throw out the verdict, saying it’s supported by “substantial evidence.” His decisions followed by hours the unsuccessful end of settlement talks that he ordered after the October verdict against Trinity.

Trinity fell as much as 2.3 percent in regular trading on news of the collapse of mediation. The shares dropped more than 2 percent further after the close in New York, when Gilstrap announced his ruling on penalties.

The rulings come as federal prosecutors in Boston probe the relationship between Dallas-based Trinity and the Federal Highway Administration, which reviews safety tests of highway devices. The FHWA’s sign-off on the ET-Plus has opened up hundreds of millions of dollars in federal taxpayer money to help reimburse states for purchases of the system.

In April, U.S. investigators subpoenaed more than a decade’s worth of documents from Trinity regarding the ET-Plus and a predecessor system, the company said in a regulatory filing.

The Texas lawsuit, brought by Joshua Harman, a Trinity competitor based in Bristol, Virginia, resulted in a jury award of $175 million. The amount was tripled under the federal False Claims Act to $525 million, making it the third largest jury verdict of 2014, according to data compiled by Bloomberg.

Gilstrap then had to decide whether to impose an additional penalty ranging from $5,500 – the minimum allowed under the law, as urged by Trinity – to $184 million, as Harman’s lawyers sought. The judge said he based the penalty on his finding that Trinity made 16,771 false claims to the government.

Harman, who filed the lawsuit on behalf of the U.S. government, will receive 30 percent of the award, or $199 million, Gilstrap said. He will also collect $19 million for legal fees and expenses, payable by Trinity, the judge said.

“This is a stepping stone to get the attention of the public and our Congressional leaders, that this is serious,” Harman said in a phone interview. “Everything could be stopped if they did a product recall right now.”

Shortly after last year’s verdict, Gilstrap ordered the parties to try to reach a settlement under the supervision of Duke University law professor Francis McGovern. During a Tuesday phone conference, McGovern said mediation had reached an impasse, according to court records.

To bring an appeal, Trinity may incur costs associated with posting a bond for the amount of the judgment plus 20 percent, or $796 million, according to a company filing with the U.S. Securities and Exchange Commission.

Trinity is defending other lawsuits. They include more than 20 personal-injury cases alleging the ET-Plus is defective, shareholder suits accusing Trinity of inadequate disclosures and claims that the company defrauded states and counties by making the undisclosed changes.

Some of the suits allege that the design revisions made the system more likely to malfunction, jamming when hit and piercing through crashing cars instead of helping them slow down.

The FHWA mandated further safety evaluations of the ET-Plus after the Texas trial. The guardrail system passed all eight crash tests, according to the agency, which is currently conducting an analysis of the ET-Plus’s real-world performance.