If leading the pack as a pace car at the Indianapolis 500 is any acknowledgement of a car’s connection to performance, then Chevrolet Camaro’s eight trips around the track is second only to the Corvette’s record of 13.

From 1975 through 1989, drivers from various circuits (Indy, NASCAR, Formula One) raced against each other driving identically-prepared Chevy Camaros in the International Race of Champions (IROC). For several years, Chevrolet produced a Camaro IROC-Z28 model in recognition of its IROC competition. 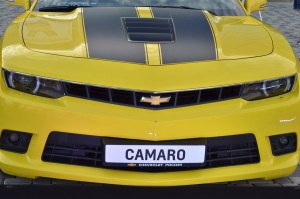 Market conditions caused Chevrolet to cease Camaro production after the 2002 model year and it remained dormant until 2010 when it re-emerged in its present—and popular—fifth-generation version. Chevrolet is looking for even greater results with the all-new, sixth-generation 2016 Camaro which will be available later this year.

Although theft data from 1967 is available, confidence in pre-1981 theft records is low due to the inconsistency in reporting protocols and vehicle identification number (VIN) systems in use prior to 1981.

When the National Highway Traffic Safety Administration mandated standardized VINs beginning with the 1981 model year, that year became the benchmark for reliable data used in all Hot Wheels Classics reports.