BNSF Railway Co., owned by Warren Buffett’s Berkshire Hathaway Inc., will be among the first companies to operate a commercial drone over hundreds of miles in a U.S. research program to test the safety of pilot-less flights.

A camera-equipped drone will fly as far as 400 miles (640 kilometers) along tracks in rural areas to inspect rails, BNSF said. The Federal Aviation Administration also chose CNN and Precision Hawk USA Inc. to make flights beyond the visual line of sight of an operator in unpopulated areas, a practice that is currently banned.

The use of drones “increases the frequency of inspection. We have some very remote areas,” Gary Grissum, BNSF’s assistant vice president of telecommunications, said in an interview. “We’re looking to be able to detect very small defaults in the rail.”

The program, called Pathfinder, will help the FAA study the long-distance commercial use of drones in the contiguous U.S. and the development of detect-and-avoid technology that is crucial for unmanned aircraft to operate safely in busy skies. The effort may ease criticism from companies including Amazon.com Inc. that have said the pace of the FAA in setting rules for commercial drones has hurt industry. 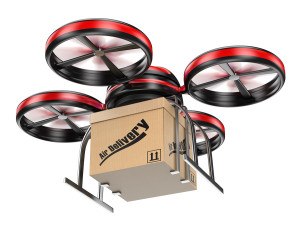 Track inspections are vital for railroads because steel rails expand and contract with heat and cold, causing them to buckle or break. BNSF operates in the western U.S., and its drone flights may start as soon as the end of this year, Grissum said.

BNSF approached the FAA about flying drones beyond an operators’ line of sight in August while working to receive an exemption to fly small drones under more stringent rules. The FAA has awarded about 250 of those exemptions as the agency finishes restrictions for small commercial unmanned aircraft that include daytime only flights at a maximum altitude of 500 feet and within view of a ground operator.

Amazon, the world’s biggest online retailer, has said it needs to be able to fly beyond the line of an operator’s field of vision for its plans to deliver packages with automated drones.

Some of the newcomers to the unmanned systems industry “are pushing a little too hard” for quick permission to fly pilot-less aircraft over long distances, said Ryan Hartman, chief executive officer of Boeing Co.’s Insitu unit. The unit has been operating its ScanEagle fixed-wing drone over long distances over the Chukchi Sea near Alaska and along the coast of Australia to help scientists track whales.

Insitu is working to gain full FAA airworthiness certification of its unmanned aircraft, which would allow for less restricted flying, Hartman said. The industry risks setbacks on safety if it’s allowed to move too quickly into long-distance flights, he said. Some aircraft, such as gliders and hot air balloons, likely won’t ever have location transmitters.

“We have to consider that we’re introducing technologies into a space with other systems that lack technology,” Hartman said in an interview. “We can’t just think that by introducing high-end technologies through our systems, it’s going to solve all the problems.”

The FAA will consider more requests from companies that want to participate in the Pathfinder program, Administrator Michael Huerta said at a news conference in Atlanta, where the Association of Unmanned Vehicle Systems International drone conference is being held. The goal is to expand the capabilities to more companies and more areas, he said.

“This is a practical research effort,” Huerta said. “We want to apply this so that we can look to integrate on the broadest scale.”

BNSF probably will fly a fixed-wing drone at altitudes of up to 1,000 feet under the program. The flights will be in conjunction with current track inspections, Grissum said.

While the railroad plans to develop detect-and-avoid technology, it can start flights without such a system because the railroad tracks are a defined area of flight that helps minimize risk, Grissum said.

“Sense-and-avoid is going to be a critical aspect for this,” he said. “Ideally we’d like to get on board, but that’s a ways down the road.”