In the workplace, age matters – but hiring or promoting based on age-related mental abilities can be a minefield, according to new research published by the American Psychological Association.

Older executives bring valuable skills to the job, such as higher “crystallized intelligence,” which includes verbal ability and knowledge born of experience, according to a study published in APA’s Journal of Applied Psychology. But compared with their younger counterparts, older executives show marked declines in “fluid intelligence,” which involves the ability to reason, the research found. 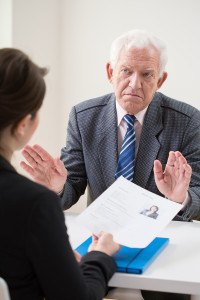 “We found that older executives performed somewhat worse on tests of general mental ability, and markedly worse on figural and inductive reasoning tests, which assess fluid intelligence,” said lead researcher Rachael M. Klein, a doctoral candidate at the University of Minnesota. “Given the rising numbers of older employees in the workforce, as well as the rise in age-based discrimination cases, it is increasingly important for employers to be careful regarding which tests of cognitive abilities they administer.”

The article details several studies designed to measure the general mental ability of older workers. One sample included 3,375 individuals applying to executive-level jobs – vice president or general manager positions within professional, technical, line and sales occupations. Participants’ ages ranged from 20-74 at the time of application. These applicants completed standardized psychological tests that were part of a managerial and professional test battery.

Tests of both fluid and crystallized cognitive abilities were administered. According to Deniz S. Ones, PhD, a study co-author, solving problems on fluid ability measures does not depend on prior learning, but rather on abstract reasoning ability. In one test that measured fluid intelligence, applicants were instructed to identify one of four pictures that best matched a target picture. High scores on this test, which is representative of tests typically used in employment settings, indicate more advanced non-verbal and analytical reasoning skills. Another fluid intelligence test involved showing participants a series of letters and asking them to quickly identify the letter that would complete the sequence.

The researchers found that general mental ability decreased gradually across age groups relative to applicants under age 30, with more marked declines for groups older than 59. “Beyond 59, average test scores for the older age groups decreased more rapidly,” they wrote.

With respect to crystallized intelligence, older individuals had higher scores on average compared with younger ones. However, fluid abilities showed the largest declines with age, while inductive reasoning slid downward as well, according to the study. The researchers replicated these findings in several large, representative general population samples.

These results should be used by employers to help them avoid age discrimination, according to the researchers. “Organizations should be cautious when using certain tests of inductive reasoning, given the magnitude of age differences we found in this research,” said Stephan Dilchert, PhD, the second author of the study. “Hiring or promoting on such measures alone may lead to younger individuals being selected at much greater rates than older candidates.”

Future research should focus on how best to help older workers transition to new positions or careers, the authors said. “Future research is needed on training outcomes for older employees who are learning new job skills unrelated to their current position or career,” Klein said.