McDonald’s fries are cooked throughout the day in a mix of vegetable oils heated to more than 335 degrees F. The hamburger grill is covered in hot grease. The cookie ovens get pretty hot, too.

No wonder getting burned is the most common injury in fast food restaurants.

Seventy-nine percent of workers were burned in the past year, most more than once, according to a Fast Food Workplace Safety survey released today, March 16, by Hart Research Associates. 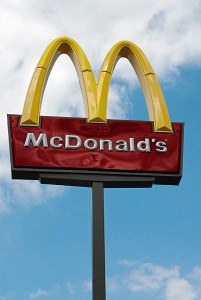 Now 28 McDonald’s workers who say they were burned on the job have filed complaints with the Occupational Safety and Health Administration. The employees, who work in 19 cities, are supported by the Fight for $15 campaign, which disclosed some of their statements and photos of burns the size of hash browns.

“McDonald’s and its franchisees give precedence to other corporate goals over worker safety,” said Randy Rabinowitz, an occupational safety and health attorney who is advising the campaign. The complaints, filed over the past few weeks, are being made public, along with the Hart survey, which was conducted for the National Council for Occupational Safety & Health, advocates for workers’ rights.

“McDonald’s and its independent franchisees are committed to providing safe working conditions for employees in the 14,000 McDonald’s Brand U.S. restaurants,” the company said in a statement. “We will review these allegations. It is important to note that these complaints are part of a larger strategy orchestrated by activists targeting our brand and designed to generate media coverage.”

The fast food chain is already struggling to fix pretty much everything about how it operates, from its menu, to its service, to its image. The protesters and activists have recently helped publicize a racial discrimination lawsuit against the company and allegations of tax avoidance in Europe. McDonald’s has said that it doesn’t discriminate and that it pays all it taxes. The burn complaints open a new front in the battle for higher wages, more corporate accountability, and unionization.

The workers allege that McDonald’s safety standards aren’t always enforced. They say they aren’t given proper training or equipment to handle hot oil and grease in particular.

Several say there are no grease aprons available, and only latex gloves keep the food safe, without regard to employees’ own safety.

Cleaning the fryer seems particularly fraught. More than half the burns workers suffered during the past year happened there, according to the Hart survey. The severity of the burns and the safety records of specific companies aren’t indicated in the survey.

The McDonald’s employees complain that managers push them to work too quickly. “If you don’t work fast enough, they give you less days on the schedule,” a worker from New Orleans wrote. Some workers say they have to clean the grill while it’s still turned on, since letting it cool takes too long. And when there’s not enough staff, they have to rush around to get everything done and often bump into hot pans, they say.

When they get burned, some say, they don’t always get a lot of sympathy—or help. Bernard Giddings, who works at a McDonald’s in Philadelphia and filed a complaint, said in an email: “Once I burned my arm so badly that I now have a scar, but when I asked my manager for burn cream, she just said, ‘Put mayonnaise on it, you’ll be good.’ ”

The franchisees operating the restaurants in New Orleans and Philadelphia didn’t respond to requests for comment.

For worker injuries overall in the fast food industry, the Bureau of Labor Statistics reports 3.5 injuries per 100 full-time workers for 2013, higher than the national average of 3.3 for all industries. The bureau notes the true numbers may be higher because it relies on reports from employers.

Whenever OSHA receives a complaint, it conducts an inspection. Agents so far have visited six of the McDonald’s named in the complaints. The agency has up to six months to complete its investigation of the restaurants and decide if a citation and fine are called for.

A single violation deemed to be “serious,” an official determination, carries a maximum penalty of $7,000.

That doesn’t seem like a big hit to the franchisees or the company—the average McDonald’s restaurant had sales of $2.5 million in 2013, according to the trade magazine QSR. The real damage, the activists hope, will be to McDonald’s reputation.