H.R. “Bob” Haldeman bears some responsibility for the Watergate scandal but he was innocent of the criminal charges brought against him, says the son of President Richard Nixon’s former chief of staff. 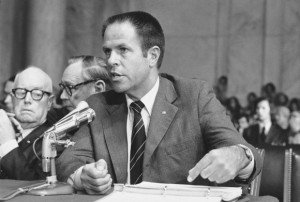 In the interview, Haldeman reveals what it was like talking with his father about Watergate as the scandal unfolded on the front pages of The Washington Post. He describes his father’s relationship with President Nixon. He also shares his impressions of Judge John Sirica and his father’s trial along with memories of visiting his father in prison.

The full interview, “The Hank Haldeman Interview: A Son of Watergate Remembers His Father,” is scheduled to air on InsuranceJournal.com on Thursday March 19 at 2 pm ET/11 am PT.

Hank Haldeman is executive vice president and director with The Sullivan Group in Los Angeles. He is also current president of the National Association of Professional Surplus Lines Office (NAPSLO).

The Watergate scandal resulted in Nixon’s resignation in his second term in 1974. Haldeman was convicted of perjury and conspiracy to obstruct justice. He was sentenced to Lompoc prison in California for 18 months.

His observations, anecdotes and memories from the interview cover a number of areas:

H.R. Haldeman died in 1993. His son remembers him as a man of steady faith and character:

“I think he never wavered in the belief that he had never committed the acts for which he was tried and convicted. His religion was a very, very important part of his life. He stuck with that throughout. That gave him a great deal of strength.

“He was very much unchanged, the same person from the advertising days before he was in the White House, through the White House, and afterwards. Everybody evolves with the experiences that you go through. But his character remained very, very steady and the same.”

The interview is sponsored by the new Learning Management System (LMS) of the Insurance Journal Academy of Insurance.

The Hank Haldeman interview will air in its entirety on Thursday, March 19 at 2 pm ET/11 am PT. Visit insurancejournal.com on March 19 for the broadcast and live discussion.