Video showed coaches being pushed into tables and fans colliding with players when Kansas State fans rushed the court after a 70-63 home win two nights ago against No. 8 Kansas.

“From a trial lawyer standpoint, I can’t think of anything more tragic than having a case come out of this,” Ronald Pope, senior partner at Ralston, Pope & Diehl LLC said in an interview yesterday from his Topeka office. “It would be nice if we could stop that first tragic poster child from getting hurt.” 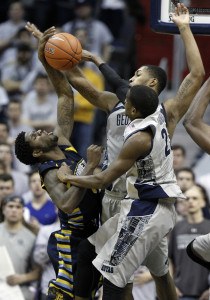 Injuries happen when fans storm basketball courts. On the eve of his 18th birthday on Feb. 6, 2004, Joe Kay’s breakaway dunk secured a big rivalry win for Tucson High school, ESPN reported March 5, 2013. In the melee that followed, the valedictorian suffered a stroke and torn carotid artery after being thrown to the floor by fans. Now 27, Stanford University graduate Kay is paralyzed on his right side.

“Because of how commonplace it is, they need to take steps to ensure the safety of the player and fans with extra security,” said Jason Weisser, a partner in the West Palm Beach, Florida, law firm of Schuler Halvorson Weisser Zoeller & Overbeck. “It certainly seems they’re on notice of a dangerous situation. You’ve seen other situations where they’ve taken precautions to prevent it.”

Though no one was seriously hurt two nights ago, Kansas coach Bill Self said in his postgame news conference that a number of fans ran into or hit his players.

“This has got to stop,” Self said. “Somebody is going to hit a player, the player is going to retaliate, you’re going to have lawsuits — it’s not right.”

The Big 12 Conference is working with both schools to review the incident, Commissioner Bob Bowlsby said in a statement. League policies put the onus on home teams to provide safety to game participants, officials and fans, he said.

The Southeastern Conference has outlawed court-storming since 2004. Schools are fined $5,000 the first time fans rush the court. The sanction jumps to $25,000 for a second offense and $50,000 for subsequent infractions.

The greatest danger and potential liability is the push of the crowd rushing down stairs, over tables and past posts to get to the court, Pope said.

“While you may be assuming your own risk, once you start having 200-300 people behind you pushing, that’s not a risk you assumed,” he said.

Every state has different recreational-use immunities, Pope said. Kansas’s laws say that if a state facility is being used for recreation, for the most part the state is immune from lawsuits unless there is gross negligence or a wanton act. That immunity may not apply if it is determined that a college basketball game is fan-based, like going to a concert or theater.

The legal approach would also vary depending on who got hurt. A student, at the game as a player or on a discounted fan ticket, may have different legal claims than a person with no affiliation to the university.

Lastly, states also have different levels for claims. In Kansas, there is a $250,000 cap on compensation for physical and emotional damages.

The debate over court-storming’s place in college basketball has intensified in the past few seasons. Last year, New Mexico State players brawled with Utah Valley fans when they ran onto the court to celebrate a five-point victory that put them atop the league standings.

Duke coach Mike Krzyzewski, whose 1,007 wins are most in men’s college basketball history, said in 2013 that allowing fans onto the court creates a potentially volatile situation.

“Just put yourself in the position of one of our players or coaches,” Krzyzewski said, according to the Raleigh News & Observer. “The potential is there all the time for a fan to just go up to you and say, ’Coach, you’re a (expletive),’ or push you or hit you. And what do you do? What if you did something? That would be the story. We deserve that type of protection.”

(With assistance from Scott Soshnick in New York.)