Liam McGee, an Irish-born banker and insurance executive who guided Hartford Financial Services Group Inc. through a taxpayer bailout and shored up the company’s finances, has died. He was 60.

McGee died Feb. 13 after a two-year battle with cancer, Hartford said Monday in a statement. He’d relocated with his family from Connecticut to California after learning he had the disease and stepping down from the insurer. 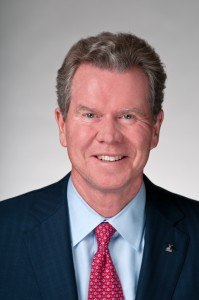 McGee ran Hartford as chief executive officer from October 2009 through the middle of 2014, turning around an insurer that had been forced into a U.S. government rescue. The CEO sold stock and debt to help the Hartford, Connecticut-based company repay its $3.4 billion bailout, and retreated from life insurance and variable annuities to focus on property-casualty coverage.

“Liam was a man of commitment, integrity and compassion,” Hartford director Thomas Renyi said in the statement. “Liam made the tough decisions necessary to guide the company through this period.”

The retirement products, which guarantee a minimum return to investors, contributed to more than $4 billion in losses that Hartford posted during the 15 months before McGee was hired to replace Ramani Ayer.

Hartford plunged more than 90 percent from its 2007 peak to its low in March 2009 of $3.33 a share amid the worst financial crisis since the Great Depression. It received the second- largest bailout package among insurers under the Troubled Asset Relief Program.

“We learned our lessons from the last two years,” McGee told analysts and investors in April 2010. “Never again will we have a concentration in any product, whether it be annuities or anything else, of the size that VA was.”

Within six months of joining Hartford, McGee had raised $1.65 billion selling stock and another $1.1 billion in debt. A stock-market recovery helped Hartford post its first profit in six quarters in the final three months of 2009, and aided McGee as he raised capital.

McGee narrowed Hartford’s focus to property-casualty insurance in 2012 after the firm’s stock slipped to the lowest valuation relative to book value of any major insurance company. Billionaire hedge-fund manager John Paulson, who at the time controlled the largest stake in the insurer, told McGee to “do something drastic” and urged him to split the company.

McGee struck a deal in late 2012 to sell a life-insurance unit to Prudential Financial Inc. and disposed of a broker- dealer, retirement-plans business and annuity units in the U.K and Japan. The stock closed at $35.86 on the day his retirement was announced, compared with $26.50, the last day before he became CEO.

“Liam McGee has led a generational transformation of Hartford, positioning it to prosper by focusing on operations with industry-leading positions,” Paulson & Co. said in a statement when the CEO announced his departure. “We thank him for his efforts on behalf of shareholders.”

Chris Swift, who was then chief financial officer, was named CEO to replace McGee on July 1.

Liam Edward McGee was born in County Donegal, Ireland, in 1954. His father, a Los Angeles bus driver who worked his way into management, moved the family from Ireland to California when Liam was a child.

McGee graduated from the University of San Diego in 1976 with a degree in biology. He played as a pitcher and outfielder for the university’s baseball team, was active in school government and wrote for the student newspaper.

He gave a commencement address in 2009, the year his son, Stephen, graduated from the school.

“My advice was that whatever you do in life, you have to have a deep passion for it,” McGee said in an October 2009 interview with the university. “If you have that passion, it won’t feel like work.”

McGee received an MBA from Pepperdine University and, in 1984, a law degree from Loyola Law School in Los Angeles.

McGee didn’t always want to go into banking. “The truth is, I hated it — back then it was all about paperwork, audits and initialing forms,” he told BusinessWeek in an article published in 2005.

Rejecting a career in law, he worked as a lending officer for a small California bank. He moved in 1990 to a predecessor to Bank of America Corp.

McGee spent almost 20 years at the lender, rising to president of the consumer and small business bank in Charlotte, North Carolina. He was responsible for deposits and debit and helped oversee the integration of companies that were acquired by the bank, such as FleetBoston Financial Corp., LaSalle Bank and credit-card issuer MBNA Corp.
Kenneth Lewis, Bank of America’s former CEO, called McGee a “true visionary” in Monday’s statement.

McGee left Bank of America in 2009 after Lewis shifted future CEO Brian Moynihan to run the consumer banking division. In a statement at the time, McGee said he would “pursue my goal of running a company.”

McGee was former chairman of the University of San Diego’s board of trustees and served two terms as a director of the Los Angeles branch of the Federal Reserve Bank of San Francisco. He also served on the board of the Bechtler Museum of Modern Art in Charlotte.

Hartford said in January 2013 that McGee had a tumor removed from his brain and would undergo low-dose chemotherapy and radiation treatment. In June 2014, the company said he was stepping down to focus on “continued recovery from a recent procedure related to my previously disclosed health issue.” McGee left Hartford’s board of directors in January 2015.